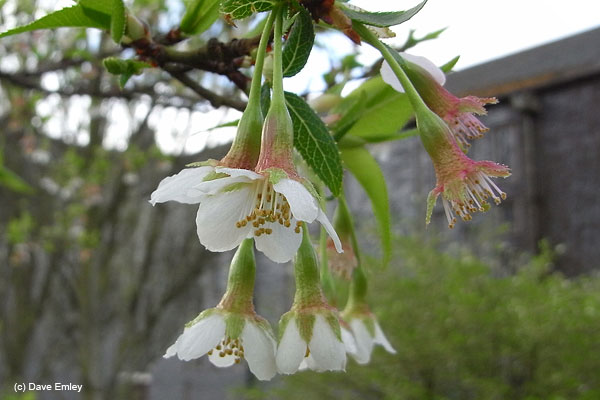 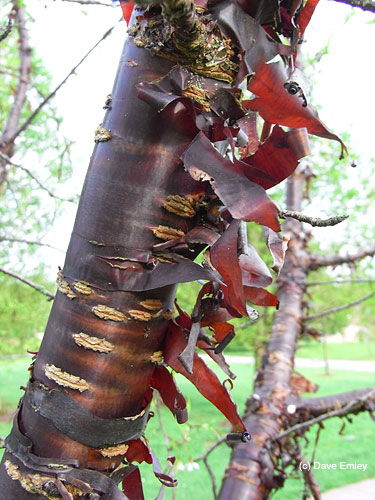 It forms a small tree up tp to5 to 6 metres (15 - 20 feet) high originating from the Eastern Himalayan region (Western Nepal, Bhutan, Sikkim, SE Tibet and Burma (Myanmar) at high altitudes (i.e. 3000 metres +) in sub-alpine forests. It is one of a group of very closely related cherries from the region: P. topkegolensis, P. harae, P. tapljungnica, and P. singalilaensis, all recently described. It is also closely related to the Tibetan Cherry - P. serrula and to P. himalaica.

Like P. serrula, P. rufa is grown for the striking attractiveness of its bark rather than its flowers which are rather insignificant. The bark is a shiny brown of various shades, often peeling into strips, along with prominent horizontal lenticles.

Flowers are somewhat small, solitary or in clusters usually white or sometimes pale pink on a calyx c.15cm long with rounded petals of similar size. They appear in May to June. The leaves are fairly small (to 8 cm long) elliptical to lance shaped with sharply toothed margins and characteristically hairy as are the flower parts. The young shoots and branchlets are covered with a reddish brown down

P. rufa was introduced into Kew around 1897 but has always remained scarce in cultivation.