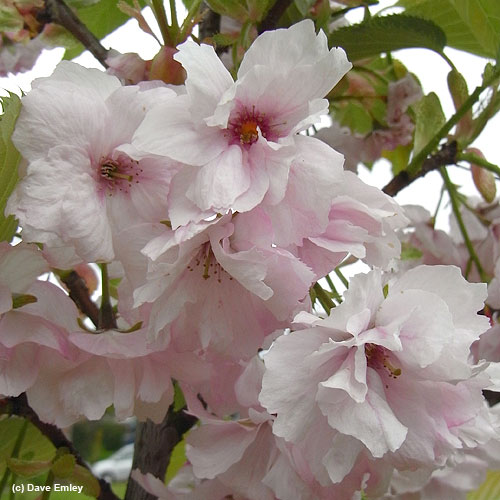 Another cherry with a highly romantic and fanciful name. It is the Japanese name for a Chinese noblewoman/courtesan famed for her beauty called Wang Zhangu who, in 33BC, was presented to barbarian tribesmen as a treaty present; she committed suicide.

It is known from the late c.18 in Japan and was offered for export in the 1930s but is now thought to be essentially extinct in its native land. Ingram thought it the most beautiful of Japanese cherries for flower colour – a purer and deeper blush pink than any other. Unfortunately this comes at a price. Its growth habit is probably among the ugliest; its sheer profusion of blooms exhausts it so consequently it only produces gaunt and malformed branches on a weak stunted tree.

Carmine-red buds, borne in multiple, short-stemmed clusters at the ends of branches open to semi-double flowers (c.12 petals) of blush pink colour which fade with age. They flower mid to late April.