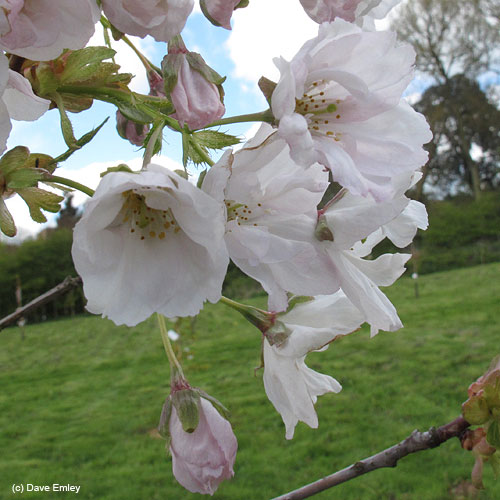 'Ojochin' is a vigorous tree with big leaves and stout growth with a stiff habit, making a broad crowned vase-shaped tree up to 7.5 m and up to 9 m across.

Flowers are very freely borne in corymbose inflorescences of 3 - 8 blooms on long pedicels. Flowers are usually single (i.e. 5 petals), fairly large, but often have a few extra petals(up to 10), c. 5 cm dia., of a blush white colour from soft pink buds. with occasional petalloids. The petals when wide open are crinkled at the edges with a faint scented of hawthorn. Flower centres are darker than outer parts of petals, giving a distinct dark spot to each blossom. Flowers end April - early May.

Winter buds are plump and ovate. Emergent leaves bronze-like and remarkably bristled, some with an acuminate tip and others often rounded at apex. They become glossy green, tough and leathery when mature. Autumn colour is bright orange.

It has been recorded from late c.17 in Japan [Kuitert] and exported to the west at end C19.

The name is Japanese for ‘Large Lantern’ i.e. paper lantern - in reference to its large bulgy flower buds at the point of bursting into bloom.

‘Ojochin’ is said to resemble ‘Senriko’ and ‘Ariake’ but without the fragrance of the latter [Kuitert], and to resemble ‘Botan’ and ‘ Mikurumu-gaeshi’ [Ingram]. According to Kuitert it’s chromosome count is Triploid (2n = 24).