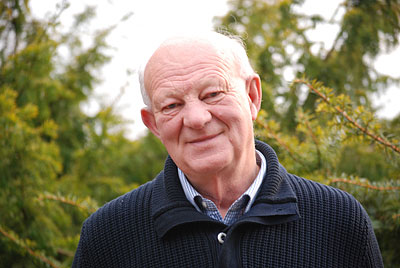 Christopher Sanders was brought up in Worcestershire and studied at the local Pershore College of Horticulture in the early 1960s, subsequently gaining an RHS Master of Horticulture degree.

From 1963-65 he worked at the nurseries of T. Hilling and Co. at Chobham, Surrey where Graham Stuart Thomas (the famous plantsman and author) had been General Manager until 1956.

In 1966 Chris joined John Hill and Sons of Spot Acre Nurseries, Nr. Stone, Staffordshire – then one of the largest nurseries in the country, covering some 400 acres by end of WWII – later becoming General Manager and a director.

In 1982 he left Hills to join Bridgemere Nurseries at Woore Staffordshire under John Ravenscroft, which had grown from its foundation in 1961 as a small rose nursery with three employees to become, with a total area of 52 hectares (130 acres), one of the largest and most successful wholesale nurseries in Britain and one of the largest garden centres in Europe.

Chris became Production Director, taking early retirement in 2002. Since retiring he has remained active in horticultural circles, publishing numerous articles on woody plants. He has regularly given lectures on plants at home and abroad. Between 2001 and 2010 Chris was a regular part-time lecturer in the Centre for Continuing & Professional Education at Keele University, running extramural classes on horticultural topics in the Midlands. Subsequent to the closure of continuing education at Keele he has continued his classes at the Dorothy Clive Gardens, Willoughbridge, Staffordshire.

Chris has travelled extensively as a plantsman, including visits to the Himalayan region, China and Tibet, and currently leads plant trips to South Africa.

Chris is one of the foremost plantsmen in the UK for woody plants. He and his longstanding friend Chris Lane are the great experts on flowering cherries in the UK if not in the West overall. They certainly have the largest collection of cultivars in the UK at Chris Lane's Witch Hazel Nursery Nr. Sittingbourne, Kent.  He also has long standing links with continental nurseries and arboreta, particularly with the De Belders at Kalmthout and Hemelrijk in Belgium.

Chris is currently a vice-chair of the RHS Woody Plant Committee, Chair of the Woody Plants Trials Panel and a member of the Advisory Panel on Nomenclature and Taxonomy, and has been made an Associate of Honour by the Royal Horticultural Society.

It was at Chris’s suggestion that the establishment of a collection of ornamental flowering cherries was started at Keele University. Since then he has acted as chief consultant and advisor to the maintenance and expansion of the collection leading to the achieving of National Collection status in 2011.

In 2014 the Royal Horticultural Society awarded him their highest honour, the Victoria Medal of Honour (VMH) which only a maximum of 63 recipients can hold at any one time.