The Lindsay String Quartet is a celebrated ensemble with a strong early connection to Keele. They originally formed a quartet at the Royal Academy of Music in 1965 and were appointed as Leverhulme Fellows at Keele University in 1967. After coming to Keele they honoured the University and its founder, Lord Lindsay, by adopting the name Lindsay String Quartet - later The Lindsays. 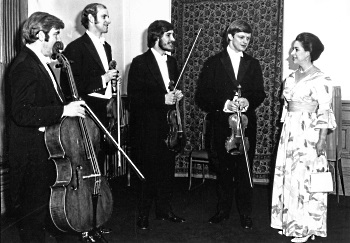 Approaching their 40th anniversary together, and 20 years since the last change of members, the quartet announced their intended retirement in 2005. They did not disband - they retired while still at their peak - and performed a very successful series of farewell concerts throughout the world, culminating in four final concerts in their home town of Sheffield in July 2005.

The quartet produced an extensive list of recordings, including two highly acclaimed Beethoven cycles, and substantial parts of the Haydn, Mozart, Schubert and Dvorak repertoires.

Many Keele alumni have submitted their own recollections of the Lindsays

"The Lindsays were resident at Keele at the start of their career and left in 1971 to go to a similar position at Sheffield. Thus a name derived from Keele became well-known in musical circles. While residents they taught students, led the university orchestra and gave recitals, with their own rehearsal room downstairs in Keele Hall. I remember they sound-proofed it with egg boxes. Peter Cropper was also a resident tutor in Barnes Hall. Over the years they became one of Britain's most renowned string quartets with a strong international reputation and a large opus of recommended recordings. They were particularly praised for their recordings of the complete Beethoven quartets, still heading many a critic's list in the guides. They were famous for their relaxed presentations, wearing open-necked colourful shirts instead of evening dress, and usually performing 'in the round', changing places for different items. This started when they were at Keele and used to give recitals in the Victoria Theatre, Stoke. I saw them give a concert like that at the prestigious Bath Mozart Festival, with the Assembly Rooms re-arranged accordingly. As usual, Peter Cropper, now a popular legend, spoke to the audience about the pieces in the programme. They were associated with many festivals abroad also, notably one in Finland."

"There were two changes from the original line-up. One of these occurred at Keele when Ronald Birks became second violin. Much later Robin Ireland became the viola player. Peter Cropper and the cellist, Bernard Gregor-Smith, were constant. The Lindsays retired in 2006. They still teach and perform in various chamber groups, and Peter Cropper is often to be heard on Radio 3 or TV documentaries discussing composers' works. Those of us who were taught by them or performed with them at Keele, or attended the many concerts they gave in the Walter Moberly Hall, feel privileged to have witnessed the start of a great career."

"While at Keele ('69-'73) I was completely unaware of them, focusing more intently on the Grateful Dead. Latterly, with a growing appreciation of classical music, I tried to see them and hear them whenever possible and was fortunate to see them in Warwick on their 'farewell' tour."

"They have now disbanded, alas! Peter Cropper, the lead violin, is still performing. I remember them well in my time at Keele. In fact, Peter gave me violin lessons - one of the functions (hopefully not too much of a trial!) that they performed as string quartet in residence."

"Sadly I didn't appreciate the Lindsay Quartet much during my time at Keele but my daughter is studying music at York University and has played viola in Youth orchestras and string quartets since childhood. It is through her that I have grown to enjoy string quartet music and have seen the Lindsay String Quartet three times. The first time was about eight years ago when a party of Sandwell Youth string quartet and orchestral players and parents went to see the Lindsay String Quartet in Birmingham as they were considered to be one of the best string quartets in the world. They were amazing - so responsive to each other's playing having been together so long. Inspiring for the young players! It was noticeable that several players from the City of Birmingham Symphony Orchestra, including the Leader, were also in the audience. I saw them during their last tour - still inspirational!"

"I owe a huge debt to Keele University for a five year residency. This gave the quartet that later became the Lindsays, the fantastic opportunity to build a repertoire enabling the four of us to earn a living from just playing string quartets. It was during this period that Keele concerts started and little did we know how it would develop into such a successful and eclectic concert series. I have devoted a lot of my career to trying to widen the appeal of chamber music and so for me, this season's programme is a perfect example of breaking down the "barriers" of so-called serious music. I challenge all of you not to find at least half a dozen adventurous concerts that really excite you, so while you are deciding, why not book the whole series. I would if I didn't live so far away."

Peter Cropper returned frequently to Newcastle-under-Lyme and Keele University performing in concerts at the New Vic; he recently became President of Keele Concerts Society. He passed away suddenly on 29 May 2015.