During our research for "A Coming of Age", the DVD telling the story of Keele by alumni for alumni, we came across some references to "Spies for Peace". We asked around for more information about this tale of copies of secret leaflets about the nuclear bunkers for regional HQs being left in the University refectory. 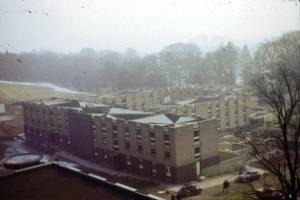 "I was visited by local police to see if I knew anything about it. I didn't, but would still like to know who gave them my name! It was generally regarded as a bit of a laugh. All a bit vague, but fairly sure I haven't imagined it."

"There were always several mimeographed notes on the tables in the refectory, meeting notices and such. The RSG (Regional Seat of Government) map was just one of many and nobody paid much attention to them until somebody (the Registrar I think) stood up on the dais by the high table in a state of high dudgeon (no other word describes adequately, possibly the only time I've ever seen someone in a state of high dudgeon) and told us there was this dreadful thing that we mustn't look at, hand in all the copies immediately and so on. By the time he'd stopped talking there were no such dreadful things in evidence anywhere. I remember that the one I saw afterwards showed one up the valley from where Mary lived, which she said provided a plausible explanation for all the mysterious trains that had been heading up the valley for a while covered in tarpaulins labelled "Do Not Look or Touch or Anything, or something along those lines. People reported things like artillery pieces under the tarpaulins."

"I remember this well! It was Sunday lunchtime in the Refectory Annexe (the RAF Hut, as it was known) and the tables had sheets of paper printed with the "We are spies for peace" message. I didn't really take much notice of it until the Registrar (John Hodgkinson) came in with all guns blazing! He insisted on collecting all the sheets and, by implication, suggested that fire and brimstone would come down on those who did not co-operate. I pocketed my copy and am still awaiting the retribution! To my knowledge, the perpetrators were not found - perhaps MI6 were less worried than the Keele authorities!" 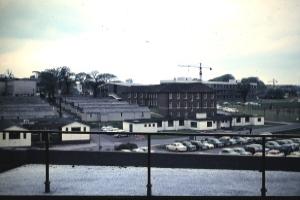 "I remember the Spies for Peace incident. I think it was around Finals exams in 1963. Leaflets were circulated giving a list of places where bunkers had been built in secret, to which the authorities would retreat for safety in the event of nuclear attack. The press soon got on to it and a notice went out from the powers-that-be at Keele that we students mustn't spread any of the information and mustn't talk to the press. This convinced many of us that there was something big being hidden from the public, so students did spread it anonymously by, for example, posting some of the leaflets in the post box near the Union. The University Registrar (Mr Hodgkinson) interviewed a few students (I was one of them), and told us it was unwise to talk to the press, but he gave us the impression that he didn't really take the incident seriously and it would soon blow over - which it did, as far as I know. This was only a few weeks from Graduation so we had enough to think about anyway."

"I knew someone at Keele who was a member of the Committee of 100 (which constantly changed its membership, so many people were members at one time or another), which I thought distributed the leaflets. It did not seem like a scandal to me. However, my sister was in the WRNS at the time and working for Lord Mountbatten at the Admiralty and she was very tight lipped and annoyed about me bringing the leaflet home."

"In 1964/65 I had a discussion in my room in the Hawthorns with the late Peter Cadogan, Secretary of the National Committee of 100, about the Spies for Peace. I can't remember what he had come to Keele for, and the date seems late for the Spies for Peace leaflet, which was published in April 1963. Despite the best efforts of the police, none of the Spies for Peace were ever uncovered. Since Nicholas Walter's death, his daughter Natasha Walter has revealed that he was one of the Spies. Peter Cadogan organised the breakaway march from the Aldermaston March of 1963 to RSG 6, the subject of the Spies for Peace leaflet. He clearly knew something about it, because he told me that the typewriter used to type the leaflet (they were done on Gestetner stencils in those days) was thrown in the Thames afterwards. One of the RSGs in Cheshire, not far from Keele, is now a museum open to the public. It's frozen in the Cold War period, circa 1970, and worth a visit." 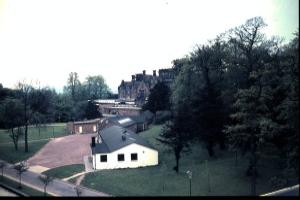 Michael Mansfield (1964) became a prominent defence lawyer, participating in some of the most controversial cases in British legal history. In 2009 he launched his book "Memoirs of a Radical Lawyer" at Keele University. Speaking in the Keele Hall Ball Room - known as the Horwood Refectory during his undergraduate years - he began by saying, "The last time I was here in 1963, I was arrested by the Police Special Branch..." As Secretary of the Students' Union, he was immediately suspected of involvement in the Spies for Peace scandal because of his access to duplicating equipment. He was questioned at Newcastle Police Station but could truthfully say that he knew nothing at all about the matter, but it did help to stimulate a lifelong interest in miscarriages of justice.

Photo left: The road passes huts towards Keele Hall and the Refectory sits to the left of Keele Hall. Graham Fisher (1965)