Keele clobber and the 'Brain Bunnies'

It has always been of vital importance for students at every university to wear the right clothes - whether to fit in or to make the desired impression on their peers.

The sobriquet of Brain Bunnies - reflecting the endemic sexism of its time - was awarded to a group of Keele students who were invited to dress in the "latest fashions" for a feature by the fab and groovy "Honey" magazine in 1966.

All photos on this page are reproduced from that edition with permission from "Honey" magazine. 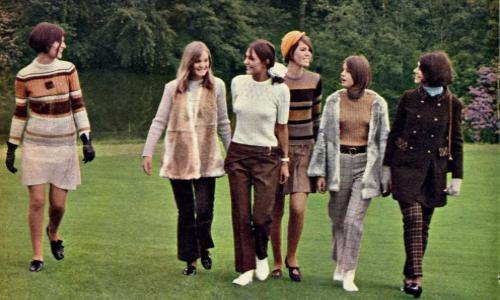 "When Georgina Haynes (Lee) (1969) and I were at the recent Pioneer Reunion we talked about being in Honey magazine in a 'Brain Bunnies' (!!!) feature. Here are the photos from my ancient copy of the magazine (Oct 1966). Marina Lewycka who was short-listed for the Orange Prize with her first novel was also one of the 'Bunnies'."

The photo above shows all of the group: "That’s me, second from the left! For Honey Magazine! We were called the Brain Bunnies! I remember we were paid £2.00 per photo which seemed like a princely sum in those days!" 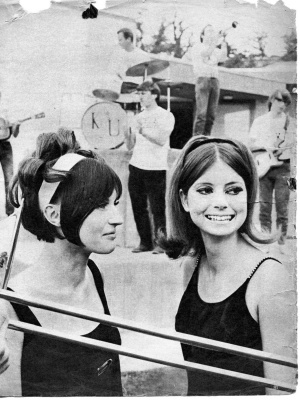 "There seemed to be restrictions on everything in 1950. We were still caught up in wartime shortages and our clothing remained fairly drab. School uniform was beyond the pale, but we still wished to buy our blazers from Henry White's and to sew on the gold wire of a college crest. Trousers and sports coats were main wear for most. Some daring persons sported sweaters. Others had shirts with detachable collars. Duffle coats were passing out of fashion so traditional raincoats re-appeared. Corduroy trousers suddenly became the fashion - these were suitably thick to tuck into the wellington boots which were essential to combat the mud of the building site that marked the early days and climate at the time. Scarves, extra long and thick, were in the glorious scarlet and gold of the colours of the time. These too could be enhanced by cloth crest badges. Throughout much of the day, the traditional academic gown ("bum-freezer) had to be worn."

"I favoured a rather natty deerstalker hat and a curly Sherlock Holmes pipe."

"The duffle coat - of course. It was purchased in 1957 and saw me for years and years. Faced with the walk from the Hawthorns, you threw the hood over your head and you pretended to be invincible. And when a cold snap headed for your rump in bed, the duffle was perfect. And with it the navy blue with gold stripe scarf. The one that will always be associated with those halcyon days." 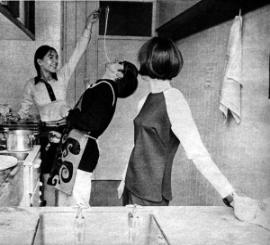 "In my day it was jeans (Levi’s for the cognoscenti) and donkey jackets. This period also saw the original Keele sweatshirt which I believe was the first UK university sweatshirt…. I was known to shop at Kinki Klothes of Longton where I bought a black shirt with white polka dots and a tab collar…and she may be a distinguished philosopher now but Janet Radcliffe Richards’ big swirly skirts accounted for the cognomen of Nell Gwynne."

"During the late Sixties, every male student had to have a black leather jacket as part of their uniform. It must have been the chosen way to look cool even when thrown over a pair of grubby jeans which of course, we all wore then as now. Jeans were very often patched extensively to personalise them and kept going by this means until they completely disintegrated. My particular favourite outfit was a purple miniskirt worn with a skinny purple polo neck and matching purple tights. I wore this to one 9 o’clock FY lecture and everyone complained of sore eyes!" 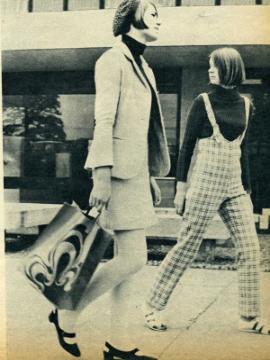 "On my first day in 1970 I wore a yellow Shetland polo-neck, chocolate-brown flared gabardine trouser, buckled brown shoes (from an exclusive shop in Milan where I’d been living) and a khaki officer’s tunic. The tunic stayed through most of my time at Keele, the sweater and trousers did not. At some point, I acquired a beret and after being accused of looking like Che I added a little red star! I had a fine collection of Shetland sweaters from the 1960s and many pairs of cords and at some time added a Belgian baggage handler's shirt (very military with epaulettes etc). My lamb-skin coat was stolen at a Christmas ball so I had to buy a donkey jacket like most wore at that time. Being an ageing mod I had Staprest trousers too and low 3-hole Doc Marten boots. The wardrobe deteriorated with the passing years and interesting stuff was the answer including shirts that should have had loose collars but didn't, steel-workers’ T-shirts (always red), white Converse basketball boots. Of course, we bought the Keele sweatshirts but after one wash they looked like poor rags – that didn’t stop some from wearing them unwashed for four years."

"I was a strange mixture of passing styles and a conscious refusal to be 'fashionable' I wore: jeans (cheap ones from Tesco); scratchy but warm home-knitted jumpers supplied by aunties; duffle coat that I still have stored away in the loft after nearly 30 years (no one allows me to wear it); brown leather shoes supposedly designed to fit the shape of your feet which actually looked like Cornish pasties with laces; and, of course, a Keele scarf (red yellow and black)."