Graduation ceremonies are the high point of the year when staff and students, friends and families, come together to celebrate success and achievement. 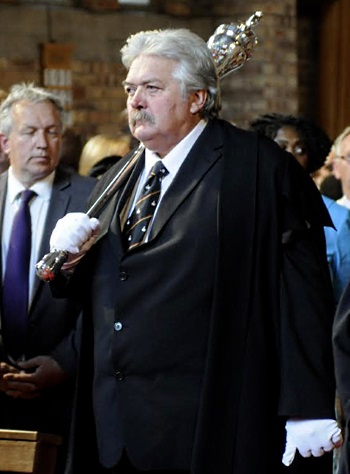 In recent years, graduation ceremonies have been held twice a year in the University Chapel, the largest available public space on campus. Ceremonies tend to be fairly small at Keele - usually between 90 and 120 students with a maximum of around 150. This allows space for dignitaries, family members and other supporters and guests to attend. While this offers a high level of intimacy and brevity it also means that with an increasing number of awards, there has also been an increase in the number of ceremonies each year (there can be as many as eighteen in July and up to five in January each year).

Over the years, ceremonies have been held in several locations in North Staffordshire - at Keele Hall to begin with and later in the Walter Moberly Hall on campus; at Trentham Gardens or Victoria Hall (Stoke-on-Trent) off-campus. Our preference nowadays is for this special occasion to take place in the familiar surroundings of the campus.

View our Portrait of a Princess.

Photo above: John Downing was born and brought up at Keele and served as Head of Grounds and Mace-Bearer for many years until 2014. 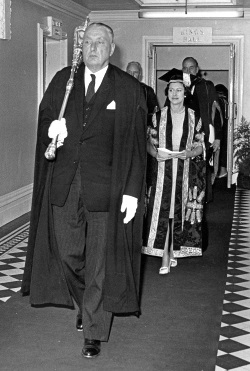 As well as awards achieved through the academic endeavour of students, a small number of Honorary Doctorates and other degrees are awarded each year to individuals of exceptional distinction and people who have given outstanding service to the University or the region. These always include one or more accomplished alumni of Keele University.

The College of Fellows was inaugurated in 2012 to recognise individuals offering special service to the University.

Special awards - such as the Neil & Gina Smith Student of the Year Award - are announced. First Class Honours degrees, Distinctions and other awards or prizes may be announced. Awards for academic staff and other honours may also be conferred.

Photo left: The Mace precedes Her Royal Highness Princess Margaret - President of the University College of North Staffordshire 1956-1961 and Chancellor of Keele University 1962-1986.

In simplified outline, the procession enters in order of Bedel / Students' Representatives / Retired Academic Staff / Academic Staff / University Executive / Civic Dignitaries / Honorary Graduands / University Council / Mace-Bearer / Conferror (Deputy Vice-Chancellor, Vice-Chancellor, or Chancellor).‌ On exit, the procession is led by the Mace-Bearer in reverse order. They are then followed by the graduating students in order of academic precedence, beginning with doctorates and concluding with first degree and undergraduate awards. Guests and friends and families of graduates follow behind the graduating class.

It is a tradition for each procession to be photographed together between the Chapel and the Forest of Light after each ceremony. It is an older tradition for graduates to take photographs on their own or with friends and family at Fresher's Gate. many take photos with a Keele mascot in Union Square or in front of the University crest on the Library lawn. Most Schools take Class photographs with their own staff and students.

The Mace and the Bedel's Baton 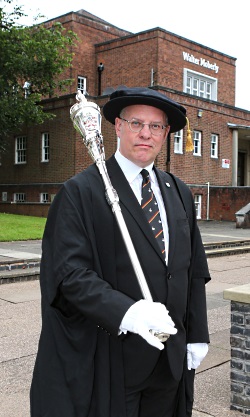 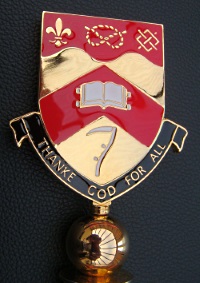 The Bedel carries a Ceremonial Baton which was commissioned in 2014.

The Mace is a traditional symbol of authority.The Keele University Mace is in three sections, the crown terminal is applied with the University Arms in enamel and engraved “Presented to the University College of North Staffordshire, by the Newcastle-under-Lyme Corporation, 1956, N. F. Bradshaw J. P., Mayor”. It was made by Henry Pidduck and Sons of Sheffield in 1956. It is made primarily of silver, weighs 1.94 kilograms (68.3 ounces), and is 107 cm long (just over 3 feet and 6 inches).

Full Circle: in 2016, Keele student Neville Bradshaw observed: "I was researching my family history and discovered a photo on the online gallery at the Brampton Museum & Art Gallery. The photo is of Norman Bradshaw, the Mayor of Newcastle, 1956 - my great uncle. I then discovered that a mace was presented to Keele in 1956 with an inscription which includes the name of a Norman F Bradshaw, Mayor."

The very first Graduation ceremony conferred degrees on the Founding Class of 1950-1954 in the Refectory of Keele Hall (now the Ballroom) on Saturday 3rd July 1954.

Tony Powell's (1959) diary entry for his graduation in 1959: "Saturday, July 4, 1959. Degree Day was all that it should have been. From the moment I awoke, the weather was absolutely perfect; brilliant sunlight, from a deep blue, cloudless sky. I awoke, as usual, just too late for breakfast. A rehearsal for the ceremony was scheduled for 10.30, so I went along, and the Registrar, Mr. Hodkinson, and Sir George Barnes, the Principal, and one or two of the profs gave us precise details on how to ascend the steps, receive the degree from the Registrar, and shake hands with the Chancellor, Her Royal Highness, the Princess Margaret. After our dismissal, I collected my robes - gown, B.A. hood and mortar-board from the RAF Hut, and Philip (another student with a car) ran me home to Birches Head, where I gave Mother the tickets. There were about 150 of us graduands when we were finally seated at the upper right of the ex-buffet tent, (sorry, marquee). Then in came the Procession, as listed in the program, and finally the Princess, beautifully made up and looking ravishing in her robes. After the usual speeches, we were presented to her, and she shook us by the hand. At first, the lay part of the congregation clapped from the moment we started up the steps to the time we sat down again, but after the first couple of dozen of highly flattered graduands, we managed to cure them of that and trained them to applaud only as we came down the steps. I thought the degree itself, despite the printing strike that was ongoing, was a very tatty and unimpressive scrap of paper - the block of the College Arms wasn’t even coloured. After the ceremony was closed, we all moved out to the lawns at the rear of the Hall for tea. It was a splendid sight; parents and friends dressed in their best..."