Keele has been remarkably active and influential in the folk scene over the years.

An early precursor of the Keele Folk Culb was the Keele Kolliery Khorus - Colin Thomas (1962) tells the story..

"Sospan Fach (Little Saucepan) was the very first item in our repertoire. A group of Welsh men in the Keele Rugby Club had got together to sing it at the Rugby Club’s annual dance in 1959 and the poster for the event labelled us as the ‘Keele Kolliery Khorus’. Wearing glowing miners’ helmets and singing in semi-darkness, we were surprised to find that the rowdy audience fell silent and listened respectfully as if we were indeed an archetypal Welsh male voice choir. 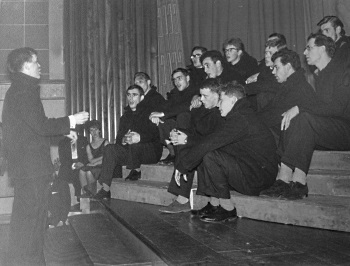 So bass Lynn Jones (1962) from the Rhondda valleys and I, Colin Thomas (1962) a tenor from Cardiff, decided to keep our little choir going. I continued to wave my arms about as the conductor while Lynn, a much better musician than I, provided quality control. He had an uncanny knack of being able to pitch every piece without the aid of a tuning fork, not too low for the basses and not too high for the tenors.

The choir grew rapidly both in numbers – you didn’t have to be Welsh to join, just male – and in repertoire – a piece didn’t have to be Welsh to qualify, just singable. We borrowed "That Lucky Old Sun" from Buffalo Bill's Barbershop, "Avante Populo" from Italian partisans in the Second World War via Aberystwyth Rugby Club and the absurd but touching "Whiffenpoof Song" from the alumni of Yale University -

"See the Whiffenpoofs assemble
With their glasses raised on high
And the magic of their singing casts a spell." 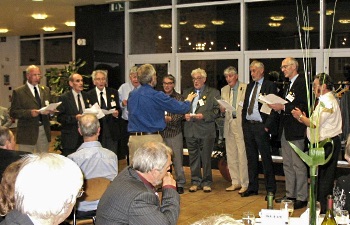 Embarrassed by our jokey title, I pompously tried to change our name to "Cantorion Cymru" in the Students Union handbook. But by then we were known and - dare I say it - loved as the Keele Kolliery Khorus and couldn’t shake it off. We sang regularly at Keele events for the next three years, including at a Royal Ball to an enthusiastic Princess Margaret, and once toured the pubs of Newcastle as part of Rag Week’s charity fund raising. We were tolerated by the drinkers rather than rapturously received but at the end of that evening we found the back room of a workingmen’s club where, lubricated by pints of beer, we sang only to and for ourselves. I will never forget that sing-song which somehow symbolised Keele comradeship – each of us listening attentively to each other as we sang, our voices seeming to blend in perfect harmony.

Lynn Jones and I have remained good friends ever since and, nearly fifty years after our formation, we gathered together as many members of the choir as we could for a 2007 Pioneers' Reunion at Keele, among them Colin James (1962) all the way from Canada and Tudor Jones (1964). By then all our voices had become worn and faded but the audience, no doubt stirred by nostalgia, demanded an encore. We settled on "Avante Populo" but I rather regret now that we didn’t make it the Whiffenpoof Song, dedicated to the owner of a Yale bar -

"We will serenade our Louis
While life and voice shall last
Then we’ll pass and be forgotten like the rest."

"​Great to read about the Keele Kolliery Khorus - and indeed to see my own photo among all the other singers in that memorable group! It brought a lump to my throat and reminded me of heady days at Keele. For the record I still remember most of the songs we sang with the KKK! I know you will not mind this Yorkshireman recalling that at least one of the 15 KKK members was not from Wales!"

Keele students were also among the pioneers of the revival of the "Rapper" dance, but what is Rapper?

Rapper (or "short sword") dance belongs to the family of hilt and point linked sword dances found in several regions of Northern Europe. However it is danced with a most unswordlike strip of spring steel with a handle at each end (the "rapper"). Many teams use rappers with a rotating handle at one end and a fixed handle at the other, Hawksword prefer two fixed handles. The introduction of the rapper had a major effect of the dance, allowing for much tighter figures and a faster, more exciting performance. Rapper is danced by a set of five dancers in a linked "hilt and point" ring accompanied by one or two characters (traditionally "Tommy" and "Betty") and usually a solo musician. (Wikipedia)