My research and teaching interests as an interdisciplinary lecturer in Sociology, Geography and Media Communication and Culture at Keele have been focussed and revolved around issued relating to the interface between predominantly urban space and culture and society.

In this I have been interested for some time in contemporary graffiti as a quotidian expression of everyday culture, as comment, criticism and decoration of public spaces in cities around the world. 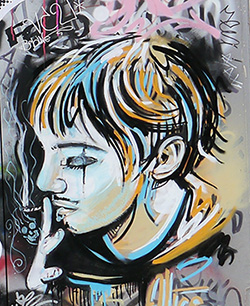 Graffiti, ‘writing on walls’ is as old as the architecture and buildings it appears on. There is a long history of people leaving signs of their passing in all ancient cultures, from the Pyramids, Hadrian’s Wall, the Parthenon and Constantinople. However, from the 1960s and 1970s graffiti has been associated with urban youth culture and the politics of new social movements. The influence of graffiti writers in Philadelphia and New York in creating new styles, using new techniques and materials and also of colonising more and more spaces in the city has become a world wide phenomenon.

Graffiti in its many forms is now commonplace in cities across the world. It decorates or defaces, depending on your point of view walls across the world. Graffiti can be considered a blight on the face of the modern city or it can be considered as the opportunity for disenfranchised predominantly urban youth to express themselves. Alternatively graffiti is an art form that is exhibited in art galleries and bought and sold for large sums of money in auction houses around the world.

These juxtapositions were recently explored in a paper given to the Keele sociology research group (see Zieleniec, The Writing on the Wall: The Cultural Contradictions of Graffiti: November 2011). In this paper some illustrative examples were used from my own experience of graffiti in British and European cities.

Aims of the research

The focus of the research is on how graffiti has an impact upon our understanding, experience and appreciation of the urban as a social and material landscape.

Specifically, it will consider where graffiti is located and what forms it takes in a number of Spanish cities (Valencia, Madrid and Barcelona).

It will also seek to investigate what roles and functions graffiti has in the aesthetic appreciation, use and experience of urban pubic space.

The primary methods used in this research will be the photographing and documenting of examples of graffiti and the locations in which it occurs within the selected cities, as well as interviews with those who have an interest in graffiti from an academic and/or aesthetic view and with those produce graffiti and wall art.

The intention/aims of the project are to analyse the quantity, style, aesthetic qualities, forms and types, content, choice of locations, etc. of graffiti in and near the centres of Spain’s three largest cities (Madrid, Barcelona and Valencia).

In addition, the role and function of graffiti within the urban environment will also be considered as well as public reactions, official and unofficial responses, policing and regulation.

The intention is to write two papers as outputs from the research: