Why is My Curriculum So White?

Keele's Manifesto for Decolonising the Curriculum

The writing of the manifesto was a collective endeavour led by Prof Bulent Gokay in his role as Keele UCU's Equalities Officer together with Aysha Panter (Keele SU Welfare and Internationalisation Officer). A core strategic working group came together following a call out at Keele's first public meeting on 'Decolonise' held on February 28th, 2018. This meeting was organised in response to the UCU's 'Day of Action on Racism'. The meeting took the form of a panel discussion on 'Decolonising the Academy: Why is my curriculum so white?' 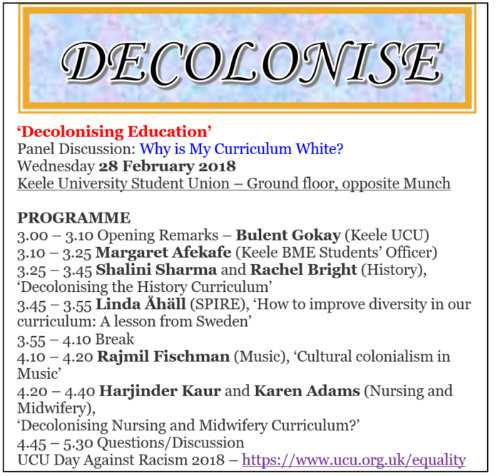 The founding members of Keele's Decolonise working group were:

The formal launch of 'Keele's Manifesto for Decolonising the Curriculum' took place in the Students Union building on June 7th, 2018. The workshop 'What would it mean to Decolonise the University Curriculum?' was attended by over 60 members of the university.

The 'Discipline Working Groups' project led by Ahmed El Kady (SU) and Farzana Shain (staff) was formed following this meeting and agreed by the steering group as a key priority for the following year.

What does decolonising the curriculum mean?

You might have heard us talking about decolonising the curriculum at Keele. But what we do mean? The Oxford Dictionary summarises ‘decolonisation’ as “the withdrawal from its colonies of a colonial power; the acquisition of political or economic independence by such colonies”. The term refers particularly to the dismantlement, in the years after WW2, of the colonial empires established prior to WW1. However, decolonisation not only refers to the complete removal of the domination of external forces within a geographical space, but it also refers to decolonisation of the mind from the colonisers ideas – ideas that made the colonised seem inferior.

how we can support you