Not all white butterflies are pests! Read on.

The whites are among the most familiar of our butterflies at Keele but, because of their rather bland black-and-white colouration, identification can cause problems. In addition, two of the species are significant pests on commercial and garden brassicas such as cabbage and sprouts whereas the other species are not. We shouldn't, therefore, tar them all with the same brush!

The four species found at Keele all belong to the same family - the Pieridae. One, the Orange-tip, belongs to the genus Anthocharis while the other three are in the genus Pieris. 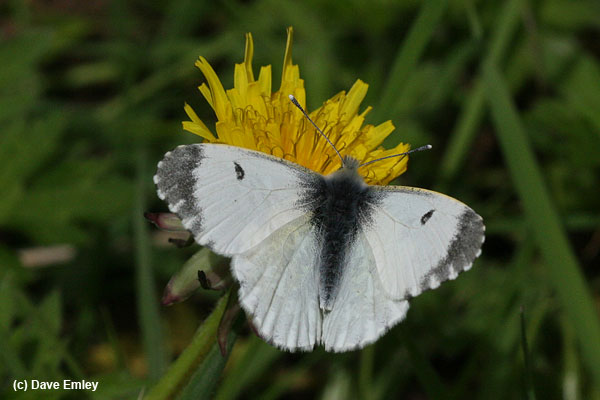 The male, with its orange-tipped wings, is the most distinctive of the "white" butterflies but it is the female that causes the confusion. She has more black on the wing tip than the other three whites covered here. The upper-wing is also much more mottled, though this does not show particularly well here. The wing tips are also more rounded. 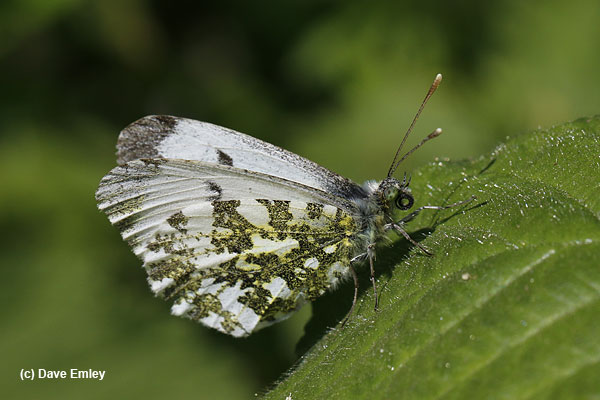 It is on the wing from April to June. The larvae feed on cruciferous plants especially Lady's Smock Cardamine pratensis and Jack-by-the-Hedge Alliaria petiolata, hence the adults can be found in damp meadows and along hedgerows where the two foodplants grow. 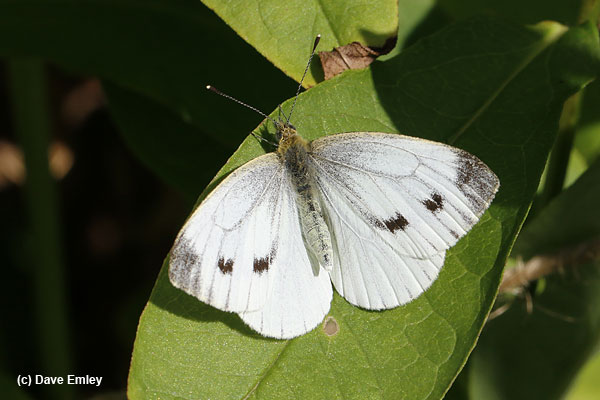 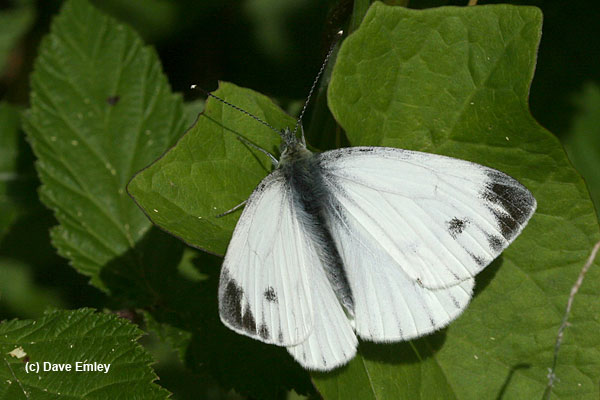 Male Green-veined White - note one spot on the wing

This is the most distinctive of the three common all-white species. It can be distinguished by the darkened veins on the upper and underside of the wing (which are more pronounced in the second brood); hence its common name. The black marking at the wing tip is not continuous but is divided into a number of smaller marks. 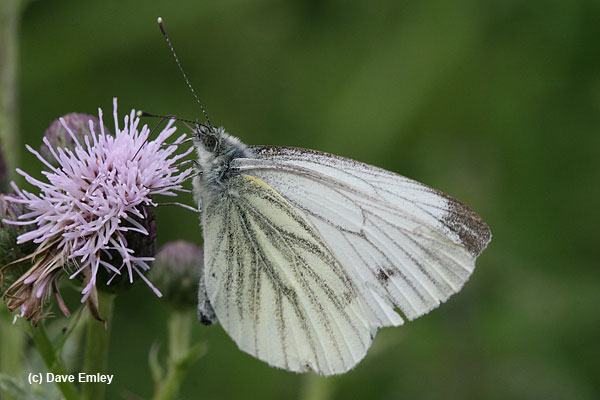 While the larvae feed on cruciferous plants, unlike the Large and Small Whites, it is not a pest on commercial or garden brassicas.

There are two broods during the year so the adults can be seen from April to September. 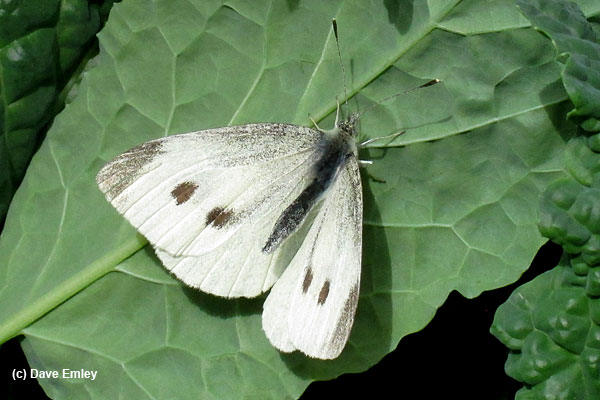 Small and Large Whites are the two species that are most often confused. Both are extremely common and both are serious pests. In both species there is a marked difference between the sexes. Small Whites are slightly smaller than Large Whites. The easiest distinguishing feature is the extent of the black patch on the wing. In Small White the patch only extends a short distance down the wing margin. The males have a single spot on the forewing while the female (illustrated) has two merging spots below the centre of the forewing in addition to the single spot. The greenish larvae usually live singly unlike those of the Large White. 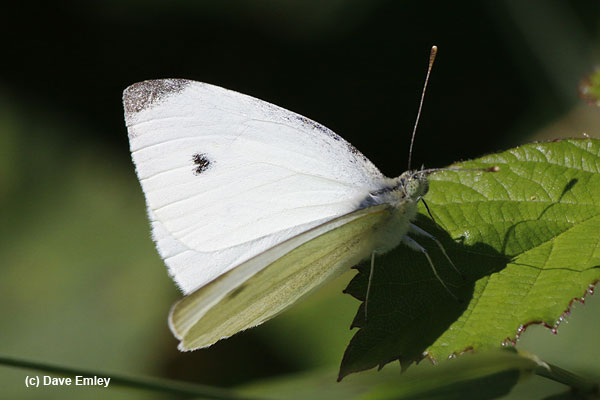 Male Small White - one spot on the wing

There are two or three broods so that the adults are on the wing from April to September or October. Numbers may be reinforced by migrants in the summer. 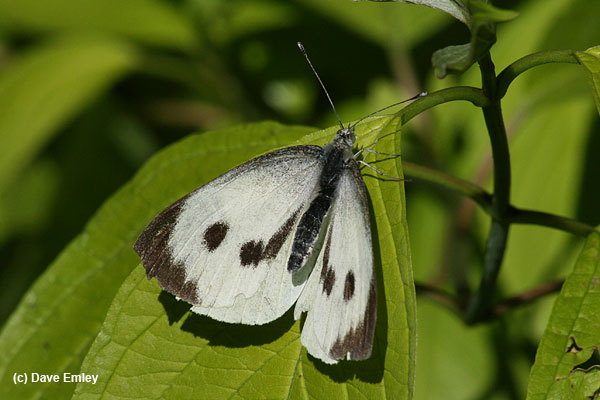 The Large White (or Cabbage White) is larger than the Small White. The sexes are easily distinguished as the female (illustrated) has two spots on the centre of the upper and underside of the forewing wing while in the male these are only seen on the underside. It is distinguished from Small White by the greater extent of the black patch on the margin of the wing.

There are several broods during the year with local insects being reinforced by migrants. The black and yellow mottled larvae feed voraciously in groups unlike the the Small White larvae which usually feed singly. If it is any consolation to gardeners Large Whites used to be much more common in the past when there were reports of cabbage fields being white over and migrations looking like snowstorms. 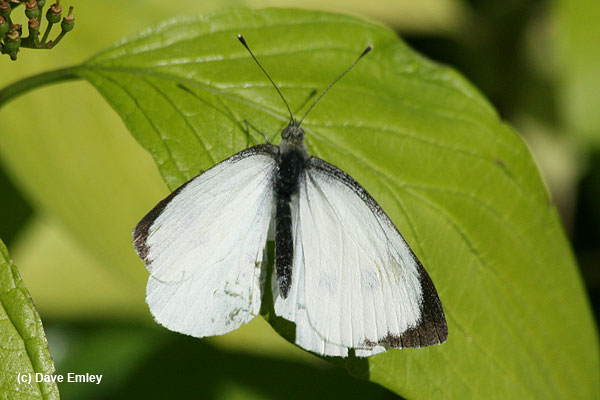 Large White ‌Male - one, often no spot on the wing

For more information on the Pieridae in general I can recommend the booklet in the Shire Natural History series:
Easterbrook, M; Butterflies - The Pieridae