The Oaks at Keele 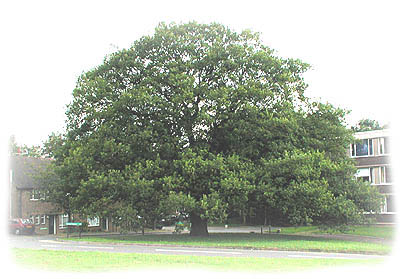 This article, The Oaks at Keele, is available as a printer-friendly Acrobat PDF file

The oak is a familiar enough tree but I wonder how many types of oak you think there are? Well, Alan Mitchell reckons that there are over 500 in the northern hemisphere! That makes our two native species look rather insignificant. We also get a false idea about oaks as our two natives are deciduous while over half of the oak species are in fact evergreen.

Looking at some of the various oak species you would be forgiven for not recognising them as oaks at all - so different are the leaves from those with which we are familiar. However, all oaks have acorns which is rather comforting!

They also have bundles of buds at the end of the twigs whereas many other trees have a single terminal bud.

In the UK we have two native oaks; Pedunculate or English Oak Quercus robur and Sessile or Durmast Oak Q. petraea. In addition we have two naturalised species; Turkey Oak Q. cerris and Holm Oak Q. ilex. There are many other species that occur to a lesser extent and which are widely planted.

At Keele we have 9 species: Pedunculate, Sessile, Turkey, Holm, American Red, Scarlet, Pin, Cork and Lucombe. In this article we will look at their identification.

These are our two native species and it is convenient to deal with them together as they are very similar in appearance. The Sessile Oak Quercus petraea is a tree of the wooded hillsides of Wales, Cumbria and Scotland where it prefers the more rapidly draining soils. However it has a need for moisture so favours the wetter areas. The Pedunculate Oak Quercus robur is a tree of the richer lowland clayey soils but they can both be found together.

The English names of the trees refer to their acorns. The acorns of Pedunculate Oak are born on long stalks or peduncles while those of Sessile Oak have very short stalks. The shape of the acorns is also slightly different. Those of Sessile Oak are short and conical, tapering steadily towards the tip, while those of Pedunculate Oak are oblong, becoming broader towards the tip, then tapering rapidly to a point.. The acorns are the easiest means of separating the two species.

The shape of the leaves of the two species is very similar but as a rule of thumb: 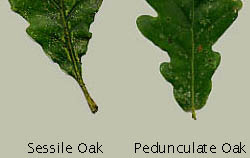 short stalk (the opposite way round to the acorns!). Looking more closely, the way in which the leaf merges into the stalk is quite different in the two species. In Sessile Oak, the leaf tapers into the stalk while in Pedunculate Oak there are two ear-like lobes or auricles at the base which are shown to better effect in the photograph on the right.

We should say right away that there is a great variation in these characters! We should also mention the "H" word - hybridisation - for they do hybridise and thus show intermediate characters to their parents. 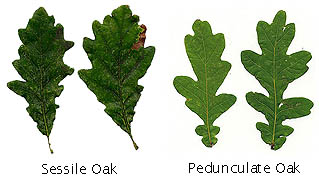 If we look at the overall shape of the leaves we find that Pedunculate Oak has much deeper lobes than Sessile. However, those illustrated on the right are probably the two extremes and most leaves fall somewhere in between in shape. Notice too how the lobes of the Sessile Oak reduce in size towards the tip. Sessile Oak leaves tend to be symmetrical on either side (a leaf folded down the midrib matches on the sides) whereas the pedunculate oak tends to be much less symmetrical.

Because of the small lobes, leaves of Sessile Oak have a greater surface area and so cast more shade beneath the tree. Thus, combined with the more acidic soil conditions on which they are found, Sessile Oak woodland tends to have a poorer ground flora. They also seem to be more resistant to attack by the caterpillars of the Green Oak Tortix moth Tortrix viridana which can defoliate Pedunculate Oaks.

A feature that appears to be fairly constant is the presence of stellate (star-like) hairs along the leaf veins on the underside of the leaf in Sessile Oaks. These are absent in Pedunculate Oak.

We have already mentioned hybridisation and it would appear that if there is any doubt over identification then the tree is probably a Sessile Oak.

For a more practical method of separation see this article Separating Sessile and Pedunculate Oaks , based on a method by Steve Potter. 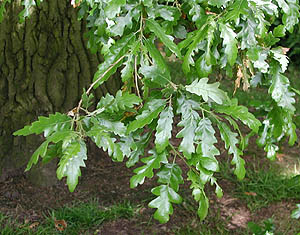 Turkey Oak is a native of southern Europe but has become naturalised in the UK. It was first planted by W. Lucombe, a nurseryman from Exeter, in 1735. It grows fast and makes a handsome tree. However, the wood splits and cracks easily so is of little value. Another alternative name is Wainscot Oak, referring to its use in making wooden paneling. It is also used as a rootstock for grafting other species of oak. 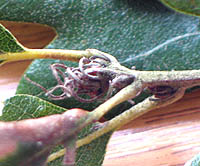 The leaves are rather leathery compared to Pedunculate Oak and Sessile Oak and are generally longer and narrower too. In fact, Turkey Oak is almost semi-evergreen with leaves being present throughout the winter at Keele.

A significant number of leaves have the middle lobes missing, giving an almost bare bit of midrib, creating almost a dumbbell shape.  Very distinctive of this oak.

One useful feature in identifying Turkey Oak is the presence of "whiskers" around the leaf bud (see photo on the left). These are not present in the other species of oak at Keele.

The other character concerns the acorn cup for this too is covered in tiny whiskers, leading to its alternative name of Mossy Cup Oak. 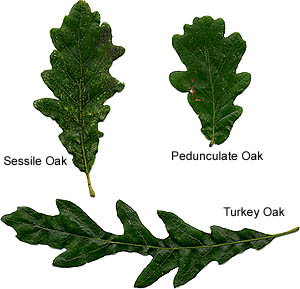 Before we move on it is worth just comparing the leaves of the three common oaks at Keele again; the rather long and narrow leaves of the Turkey Oak, the short stalk with lobed base of the Pedunculate Oak and the tapered base with long stalk of the Sessile Oak.

As its name suggests, it is a native of North America where it is the fastest growing oak and one of about 20 "red-leaved" species. It grows well in the UK on deep well-drained soils where it is planted for its fast growth and for its red foliage in the autumn. It is used in forestry as a screen to commercial crops but hasn't found favour as a street tree because the large leaves can be quite slippery when they fall.

As the name suggests the leaves are red in the autumn. They are quite different to those of any of the other oaks on campus being large, broad and with deeply-cut toothed lobes. Each lobe terminates in a small bristle or whisker. The acorns remain small for the first season before developing to their full size the following year.

The alternative name of Evergreen Oak tells us that this is an evergreen species and the latin name of Quercus ilex tells us that its leaves are very like those of the Holly Ilex aquifolium. In fact, "holm" is an Old English word for a holly bush. It is, then, quite different from the other species at Keele. Originating in the western Mediterranean, it has been growing here for over 400 years and is our commonest evergreen species. Because of its resistance to salt-laden winds, it is often used as a windbreak in coastal areas in the south.

As mentioned, the leaves are holly-like, , leathery and shiny green above and felty beneath, but are spineless on all but the youngest specimens.

The bark is unlike the other species too, being almost black and cut into very small squares - reticulated. The acorn is 2/3 enclosed in its cup.

This tree is a cross between the Cork Oak Q. suber and the Turkey Oak Q. cerris. In the wild, where these two species meet, the cross occurs naturally but the trees that we grow in the UK originated in the nursery of W. Lucombe in Exeter in 1763. Lucombe was so impressed with its timber that he had planks cut and stored under his bed to be used to make his coffin! He died at age 102.

The Cork Oak is evergreen while the Turkey is deciduous, so the hybrid tries to be both and ends up as a 'leaf-exchanging' tree i.e. it keeps it's tatty old leaves until spring then finally drops them before growing the next set straight away. The leaf is toothed and quite unlike any of the other oaks at Keele. The acorn cups, like those of its Turkey Oak parent, have whiskers.

Our single tree can be found beside the ring road between Life Sciences and the Terrace. 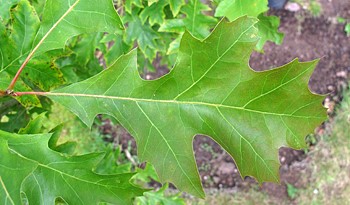 This species is a native of SE and Central USA that can grow to 30m. The leaf is up to 18cm long, glossy green, with up to seven lobes, each ending in a point which may have a terminal whisker.

The lobes are separated by deep indentations or sinuses. As the name suggests, the autumn colours are a deep red.

The leaf is very similar to that of Pin Oak. In that species the sinuses are a broad "U" shape whereas in Scarlet Oak they are like a slightly squashed "C".

Also, Pin Oak has tufts of brownish hairs in the vein axils underneath, whereas this species is almost hairless. 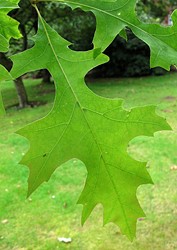 Pin Oak is a native of NE and central USA and, as its scientific name suggests, is naturally a wetland tree growing in marshland or poorly-drained soil.

It is very similar in leaf to Scarlet Oak. In that species the indentations in the leaf sinuses are like a slightly squashed "C" whereas in this species they are a broad "U" shape.

Also this species has tufts of brown hairs in vein axils on the underside whereas Scarlet Oak has few hairs beneath.

The autumn leaf colour tends to be more bronzy unlike Scarlet Oak which turns red. 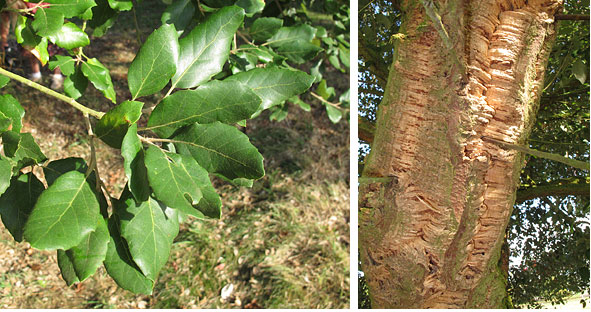 A tree of southern Europe and North Africa that most people of heard of but perhaps have never seen. It is uncommon in collections in the UK, most being found in the south of the country. It is evergreen like many Mediterranean species. The leaves are very like those of Holm Oak. The bark is corky in nature hence its use in corks for wine bottles etc.