What's black and yellow and strikes fear in the heart of grown men? Answer; the humble wasp. Wasps have a bad image. Yes, they sting but not if left alone. In fact they are very beneficial insects with a highly developed social structure.

This page was put together after receiving many enquiries about wasps following a particularly bad summer for them and is aimed at a UK audience. It is meant only as a source of background information.

If you are at all worried by them then contact your local Public Health Department. If you are stung and are allergic to stings generally then seek medical attention immediately. 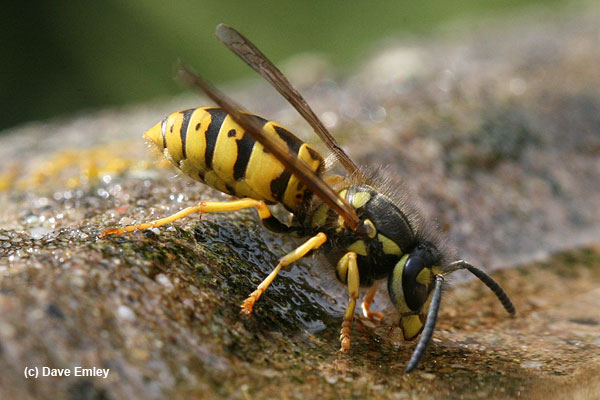 The black and yellow colouring of the wasp has been used by a number of harmless insects as a means protection, so first we need be sure that we are indeed looking at a wasp.

Wasps belong to the group of insects known as the Hymenoptera which also includes the sawflies, ichneumons, bees and ants. There are many species of wasp but the group that we are concerned with is the Social Wasps belonging to the family Vespidae. 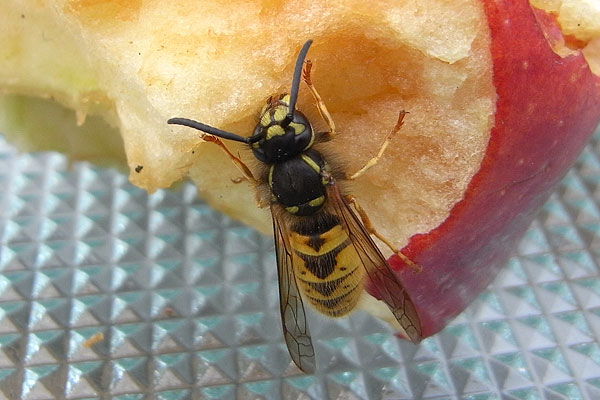 Looking at the photographs above of a worker Wasp Vespula the main characteristics are:

The needle-like sting is concealed near the tip of the abdomen. It is a modified ovipositor and is therefore only possessed by the female - male wasps do not sting.

Both the queens and the workers are females and develop from fertilised eggs.

Workers are smaller than queens and never lay fertilised eggs.

Male wasps are also smaller than queens and they develop from unfertilised eggs laid by queens or sometimes by workers in the autumn. 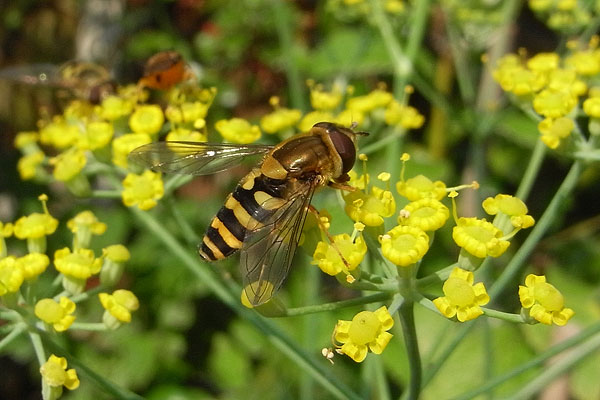 There are many other, harmless, insects that have a yellow-and-black colour scheme. They gain protection by resembling wasps. These include the hoverflies which have only one pair of wings and small three-segmented antennae .

There are seven species of social wasp in the UK. The commonest is the Common Wasp Vespula vulgaris followed by the German Wasp Vespula germanica, both of which nest underground and in cavities in trees, walls and buildings.

The Tree Wasp Dolichovespula sylvestris is locally common and very aggressive and builds its nest in trees and other aerial sites as well as underground.

The Norwegian Wasp Dolichovespula norwegica is less common in the southern half of Britain but is the dominant species in Scotland. It builds its nest among twigs and branches.

The Cuckoo Wasp Vespula austriaca does not have workers of its own and lays its eggs in the nest of another species - the Red Wasp Vespula rufa - which nests underground.

The largest - the Hornet Vespa crabro - is largely a southern species which nests in hollow trees or in buildings but, with the recent series of mild winters, it is being found much further north and is now not uncommon in North Staffordshire.

The differences between the species are subtle but they all have similar black and yellow markings and THEY ALL STING! 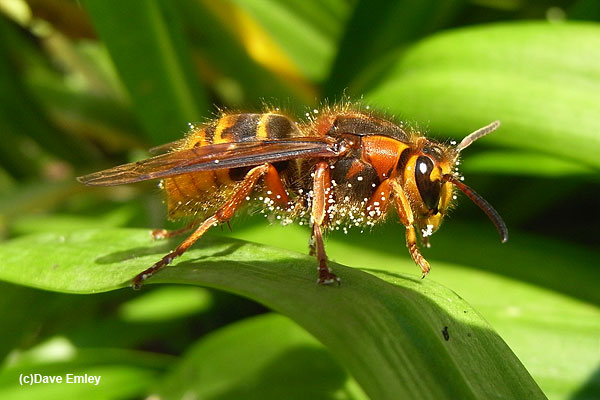 What do they feed on?

The grubs require a largely protein diet and they are thus fed on masticated insect prey brought in by foraging workers, but rotting meat and fish may also be used. The workers, however, need mainly energy foods ie. carbohydrates and thus favour nectar and a variety of sweet substances such as fresh and processed fruits. There is also an exchange of foods between the grubs and the workers that feed them in that the grubs secrete a sweet liquid that the workers drink. The queen, when confined to the nest, is fed on a mixture of nectar, fruit and meat juices by the workers.

The number of wasps in the late summer/autumn depends on two things.

A bad spring will mean that many nests are destroyed so fewer wasps are produced.

A large number of females overwintering will mean more competition for nest sites etc. in spring so the surviving queens will be in poorer condition and therefore fewer offspring will be produced.

The following year, however, should see lower numbers because of the competition from many overwintering females hence the good and bad years for wasps that we observe.

Left alone, wasps are not normally aggressive. However, they become more aggressive as a result of crowding and temperature.

Overcrowding or high temperatures can lead to aggressive behaviour both in wasps and Man therefore any slight irritation can cause an aggressive response.

The sting is the object of our fear of wasps. Unlike that of the bee, the wasp sting has no barbs and can be used many times. The sting is, in fact, a modified ovipositor and therefore the male wasps are unable to sting. At the base of the sting is a venom-containing sac. The wasp can squeeze this sac and thus deliver the venom. The venom contains a pheromone which acts as an alarm to other wasps in the area and they can soon join in! The pain of the sting is caused by a complex protein injected through the needle-like sting as it penetrates the skin. Individuals react differently: some are hardly affected, others may suffer pain and swelling while in other, rare cases, individuals may suffer serious allergic reactions which may result in death from anaphylactic shock.

Cures for wasp stings are many. Here are a few of the more wacky ones from the 15th century:

Contrary to popular belief a wasp sting has a pH of 6.8 to 6.9 so is neutral NOT acidic, therefore the application of an alkali will do no good.

The important thing is to:

Wasps can cause serious damage to soft fruit but ripening apples and pears are unlikely to be affected unless first damaged by birds or caterpillars. Wasps can be a considerable pest in sugar warehouses, jam factories and other sites containing sweet-smelling substances. They are a nuisance in houses where food is being cooked or eaten. They are also a serious pest of hive bees in some seasons. In the spring workers will attack and carry off foraging worker bees while later in the year they will take honey and carry off bee grubs and pupae.

Wasps are extremely beneficial animals. They feed their young on a wide range of invertebrates and in so doing help to control many insect pests. They also visit flowers and therefore help in pollination.

What can I do about them?

So, you've got wasps and you now know a lot about them, but you still want to get rid of them. What do you do? The answer is simple; call your local Public Health Department. Wasps are best left to the professionals. If you try and remove them yourself you will only get stung - probably many times!

If you are happy to put up with them - they will not attack you unless they are antagonised - then by late autumn the colony will have died out and you can safely remove the nest.