How Silicon Protects Against the Toxicity of Aluminium 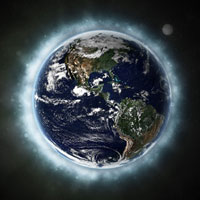 Aluminium is arguably the planet’s most significant ecotoxin. It is certainly its most abundant being the third most abundant element in the Earth’s crust. Life on Earth as we know it today exists in spite of aluminium and because through evolutionary time silicon protected all living things from the toxicity of aluminium.

While it has been known for some time how this protection is achieved, EPSRC-funded research led by Professor Christopher Exley at Keele University has now provided the detailed inorganic chemistry which affords this protection.

Professor Exley has spent the last 30 years investigating the unique inorganic chemistry of the reaction of aluminium with silicon to form hydroxyaluminosilicates. However, only now, in close collaboration with Professor Xabier Lopez of the University of San Sebastian, through the application of computational chemistry have both the reactants and the earliest products of these life-protecting reactions been confirmed. Silicic acid and a neutral dimer of aluminium hydroxide have been identified as the critical starting points for this unique inorganic chemistry. Understanding this reaction allows understanding of and critically the potential to predict those circumstances where the natural protection afforded by silicon against the toxicity of aluminium in living things might be subverted. Enabling us to identify those conditions on Earth where the toxicity of aluminium might be experienced as has been seen in areas impacted by Acid Rain and indeed in relation to human exposure to aluminium.

Aluminium toxicity in humans has yet to be fully recognised. There are strong links with chronic human diseases such as Alzheimer’s disease, autoimmune diseases and some cancers. However, the unique inorganic chemistry described in this new paper in Nature’s ‘Scientific Reports’ will provide the antidote to this toxicity when and if it is needed both now and in the future.

Most important of all the teams at Keele University (led by Professor Christopher Exley) and The University of San Sebastian (led by Professor Xabier Lopez) have opened a window onto why Life evolved so successfully on planet Earth and in the presence of its most abundant ecotoxin, aluminium.

School of Life Sciences
back
modify