A nationally important collection of material purchased in 1957 from Mr Raymond Richards of Birkdale and later of Gawsworth Hall, Cheshire. Born in 1906, Richards made a name for himself as a county historian and antiquary. He published Old Cheshire Churches in 1947, became chairman of the Ancient Monuments Society, and for 25 years was a trustee of the Ancient Monuments Preservation Trust. He died in Gawsworth in 1978.

The collection, which had been deposited at the John Rylands Library, Manchester, was amassed over a number of years from many different sources and is heterogeneous in character, comprising groups of family papers, a fine collection of medieval title deeds, manuscripts and printed volumes, autographs, prints, ephemera, and hundreds of single unrelated items.

The Raymond Richards Collection includes several significant family archives. The Chetwode family papers number over 600 items and relate mainly to land transactions in Cheshire and Berkshire. A group of 150 pieces, principally dating from the fifteenth century, concern the town of Nantwich. An eighteenth century cartulary of the Chetwode muniments survives. Sixty items relating to the Fox family of Statham Lodge at Lymm in Cheshire are concerned with the sale of properties in Lancashire, Cheshire, Lincolnshire and Westmorland. The muniments of Polstead Hall, Suffolk, comprise some 200 deeds, letters and papers relating to Cambridgeshire, Essex, Gloucestershire, Suffolk and the City of London dating from the fourteenth to the eighteenth centuries. The Meysey Thompson muniments consist of some 1,200 Yorkshire deeds and family settlements dating from the seventeenth to the nineteenth centuries. Smaller groups of papers relate to the Wainwright and Whitehouse families of Brierley, Staffordshire, and to the Bulkeley, Lyon of Appleton Hall and Hankinson families of Cheshire, the Devereux family of Hereford and the Smallwood family.

Within the Raymond Richards collection is a most important collection of medieval deeds known as the Hatton Wood collection. This was amassed by Richard Henry Wood (1820-1908), a historian of Lancashire and Cheshire. The collection was deposited in the John Rylands Library in 1940 by Captain J. Hatton Wood and was subsequently acquired by Raymond Richards. The collection, comprising some 1,500 items in total is rich in documents relating to religious houses and other communities dating from the twelfth to the fifteenth centuries. These include Sempringham, Christ Church, Canterbury, Waltham, St. Werburgh's, Chester, Pipewell, Robertsbridge and Whalley. Many charters retain their seals, some of which are rare. Several royal grants, some with fine seals, are preserved in the collection and numerous deeds relate to some 25 English counties, Kent being most fully represented. Staffordshire is represented by eight items, the most significant being the 1440 inspeximus by letters patent under the great seal confirming previous charters granted to the burgesses of Stafford. A fragment of the seal is appended by silk cords. 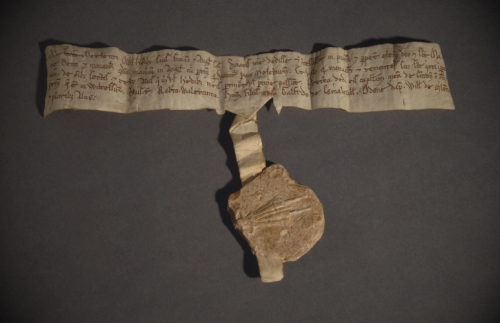 Monastic deed with appended seal c.1107. The gift of the manor of Milburne, Dorset, and the chapel of Compton, Wiltshire, from Robert, Count of Meulan, to the Abbey of Bec. Raymond Richards Collection, Hatton Wood M72/46/1/1

Within the Hatton Wood collection is an archive of the Legh family of Booths Hall, near Knutsford in Cheshire, consisting of approximately 360 items, almost entirely muniments of title dating from before 1500. As one would expect, material relating to Knutsford, Torkington, Mobberley, Rostherne and Ollerton predominates. This archive has been supplemented by further purchases of Legh material dating from the sixteenth century to the nineteenth century, comprising Cheshire deeds, estate papers and personal papers

An accumulation of 136 items relating to Lord North and Guilford, later 1st Earl of Guilford. Included are papers from the period when Lord North was acting as executor of William Moore (d. 1746) of Polesden, Surrey and as trustee for Miss Ann Jekyll. Miscellaneous correspondence, papers of various families and items concerned with local government, the armed forces and the colonies complete the Lord North archive.

An important accumulation of volumes dating from 1745 to 1797, recording the trading activities of Messrs. William Davenport & Co., a Liverpool firm involved in the slave trade. Nine volumes contain invoices of cargoes and accounts for trading with West Africa and with the West Indies. The remaining volumes comprise a waste book (1745-1766), an entry book with copies of bills of exchange, two ledgers (1763-1775, 1788-1797), a cash book (1764-1775), a register containing details of nearly 3,000 bills of exchange (1769-1786) and finally an account book for beads and cowries (1766-1770). This last item has been used by archaeologists in Canada and the United States to date North American Indian graves. In all 63 voyages are recorded. The manuscripts are of great historical importance as much of the primary material on the slave trade was destroyed by parties with guilty consciences.

A microfilm edition of the William Davenport Papers was published by Microform Academic Publishers and a digitised version is available online to Keele registered users (on-campus access only).

Of the numerous small groups and single items in the Raymond Richards collection, acquired for their autographs or general antiquarian interest, there is space only to give some indication of their wide variety. As one might expect Cheshire items were of special interest to this collector. These include muragers' accounts for the city of Chester, 1800-1809, a sixteenth century notebook of customs and dues payable at Middlewich with lists of inhabitants, a commonplace book of Joseph Warburton of Bowden, 1707, an account book of the executors of Thomas Ekins of Chester, 1745-1753, three eighteenth-century account books relating to Titherington, deeds relating to Thelwall, 1777-1886, a Combermere cropping book, an account book of the Revd. John Parry's printing press in Chester, 1826-1837, James Hall's manuscript volumes relating to Nantwich, Acton, Dorfield, Wistaston, Audlem and Wybunbury and five seventeenth century items from Prestbury respecting burying in wool, a practice enforced by the Burial in Wool Acts of 1667 and 1678.

Special mention may be made of various literary items in the Raymond Richards collection. A fragment from a memorandum book of Henry Fielding reflecting his activities as a Justice of the Peace, part of a letter from Samuel Richardson to Susanna Highmore, c.1750, and a letter of Christopher Anstey, author of The New Bath Guide (1766), to his publisher Robert Dodsley have all been published. A holograph poem 'The Goose', by Alfred, Lord Tennyson survives on a single sheet torn from a notebook. A scrapbook compiled by John Anderson in 1870 with the purpose of displaying autographs includes letters from Charles Dickens, H. W. Longfellow, Maria Edgeworth, Leigh Hunt, W .H. Ainsworth and Harriet Martineau.

A group of letters from Edward VII to Lady Dorothy Nevill is preserved as is a made up volume of items such as seating plans and various kinds of admission tickets printed in connection with Queen Victoria's coronation in 1838. The latter may have been compiled as an official record by someone in the Earl Marshal's office or for private purposes. An album of largely unpublished photographs of the royal family, their relations and friends collected by Miss Hildyard, a governess to the children of Queen Victoria, completes the items of royal connection in the Raymond Richards Collection.

Of considerable interest to scholars is a minute book of the Society for the Improvement of West India Plantership (later the Agricultural Society) which runs from 1811-1816. The Society held monthly meetings when each estate was considered as well as the production of sugar and other matters. Other miscellaneous items of particular note are the building accounts for Blenheim Palace, January 1708, a group of letters (1876-1879), some of which were written during the Afghan war, of William Simpson special artist to the Illustrated London News, and a release from the Bishop of Ely to Thomas Bycham of messages in Ely, with the chapter seal, 1472.

The collection also includes several hundred prints, mostly portraits or of topographical interest, formerly held in the library of the Earl of Crawford and Balcarres. As for ephemera, election posters from Wolverhampton dating from 1820 and 1848 have their place in the collection as does a group of 18th and nineteenth century playbills, mostly from the Theatre Royal, Chester and the Liver Theatre, Liverpool.

The material is owned by Keele, is listed, and there are no restrictions on access.