Flowering plants and ferns of Keele 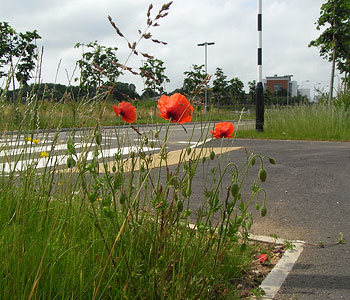 Keele is perhaps more interesting for its trees than its flowering plants, however there are a few unusual species amongst them.

The deciduous woodland, consisting mainly of Oak and Sycamore has a poor ground flora which makes for a fine display of Bluebells in the spring. The old sewage-works site, just south of lake 5, is the site of a small colony of Harebell and Betony. The area between that site and the entrance to Lymes Road used to be very good for plants. Indeed, there was a colony of Common Spotted Orchids and a few Northern Marsh Orchids. These would appear to have gone - it is too overgrown now.

Keele has a good bramble flora and is the type locality for Rubus sneydii, named by Eric Edees.

One plant, Rhododendron ponticum, caused major problems in the deciduous woodland where it was very invasive. Currently (April 2016) it has been removed from the whole of the estate. This has had a profound effect on the landscape, especially that of Upper and Lower Springpool Wood. These areas have been replanted with native species and it will be interesting to monitor the changes as the sites mature.

Some of our more interesting species are only transitory - appearing when ground is cleared or dug over.

The downloadable account below contains many of the commoner species but further records would be welcome.

Please send any sightings to me  by E-Mail or to Geography, Geology and the Environment, William Smith Building.