Dragonflies and Damselflies of Keele 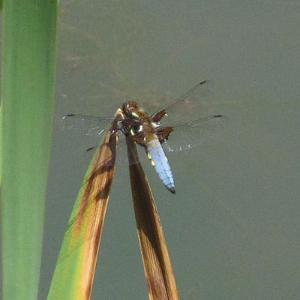 There is little to compare to the sight of an Emperor Dragonfly patrolling a lake. These archaic insects are masters of the air and a delight to watch.

There has been a dramatic surge in interest in these insects with a wealth of literature and videos available to help with identification.

With a series of eight lakes on the main campus and four more on Phase 3, Keele is well placed for those interested in studying them.

Brown Hawker Aeshna grandis Linnaeus : The commonest of the large dragonflies at Keele.

Emperor Dragonfly Anax imperator Leach : first noted on Lake 1 on 30/7/2000. It is not uncommon at Keele, the pools on Phase 3 are a good spot for them and they have been seen egg-laying there.

Banded Demoiselle Calopteryx splendens  Harris: common; even seen over the centre of campus.