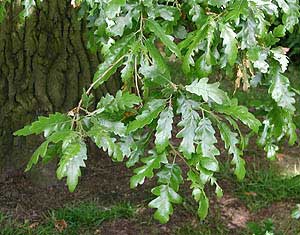 Origin: a native of SW Europe, it was introduced in 1735. It is abundant in the south as a hedgerow tree and is spreading elsewhere naturally. Frequently planted in parks, gardens etc. Unlike the other two oaks - Pedunculate and Sessile - it grows well on chalky soils.

Tree: young trees are rather slender and conic while older trees are broadly domed.

The bark is greyish and fissured into small plates.

The leaf is quite different from either Sessile or Pedunculate Oaks, being rather long and narrow with very deep lobes. Another distinctive feature are the long stipules or "whiskers" that can be found around the buds. The leaves remain on the tree throughout the winter and can be considered to be almost evergreen.

The acorns are quite different from sessile and pedunculate acorns; the cup having no stalk and being covered in hairs or whiskers - hence its alternative name of "mossy cup oak".

Uses: The timber grown in this country is prone to cracking, warps easily and distorts on drying and thus is not of use in major timber construction. It used largely to be used for wood panelling - hence its early name of "wainscot oak" . Today, because of its more rapid growth, it tends to be planted for shelter and amenity. However, it is the source of the Knopper Gall that affects the acorns of Pedunculate Oak.

Location : Scattered around campus. The best specimen can be found by the steps between Earth Sciences and Geography and Life Sciences; compartment 35b; square K8;