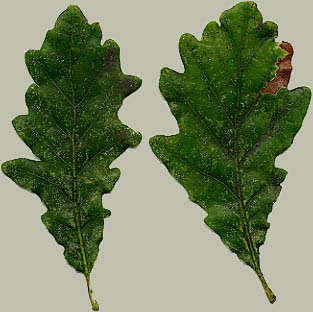 Origin: A native species which, unlike Pedunculate Oak, is more dominant in the north and west on lighter soils and is an important and dominant species in the hillside woodlands of Wales. However, because of extensive planting, there is no longer a clear cut division. It is thought to be an early post-Ice Ages arrival - even before the Pedunculate Oak.

In shape it is domed and with a straighter bole than Pedunculate Oak, with branches radiating outwards. Foresters say that it has the better trunk of the two species; more likely to persist into the crown and so yield larger lengths of timber.

The leaves are spread evenly over the tree, not clustered as in Pedunculate Oak thus giving rise to a more even and denser shade and hence shelter beneath - a feature made use of by cattle in the wilder, more exposed situations where it grows. Like the Pedunculate Oak the bark it is greyish and finely fissured into vertical plates.

The leaves have a longish stalk with no auricles or lobes at the base; the edges of the leaves merging gradually into the stalk. The lateral lobes are shallow, often cut less than half way to the midrib. However, this species hybridises readily with Pedunculate Oak and it is possible to find trees exhibiting features of both parents. The leaves tend not to be attacked as readily by the Green Oak Tortrix as the Pedunculate Oak. 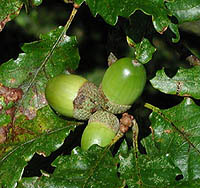 The acorns have very short stalks - a condition known as sessile - hence the common name.

Location : Scattered around the campus but the problem with hybridisation makes it difficult to find the true species.

See Separating Sessile and Pedunculate Oaks by Steve Potter for more information on separating Pedunculate and Sessile Oaks and their hybrid.