This is the familiar oak of the English countryside. It is a native species and is widespread on basic loams and clays, up to an altitude of 400-500m. In shape, it is widely and irregularly domed with some massive lower branches. 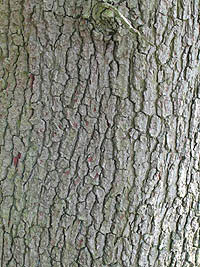 The bark is greyish and fissured into short, narrow vertical plates.

Separation of the Pedunculate from Sessile Oak is complicated by the fact that the two hybridise readily. Sometimes it is difficult to find the true species. A typical Pedunculate Oak leaf should have the following:

The leaves in the picture above are typical of Pedunculate Oak with clearly deeply-cut lobes and short stalk. The rounded ear-like lobes or auricles at the base of the leaf are more clearly seen in the close-up photograph on the left. However, not all leaves are as obvious as this and it is necessary to examine a range of leaves.

It is from the fruit or acorn that we get its English name - the acorns are attached to the twig by a long stalk or peduncle - giving them the appearance of a clay pipe - as in the photograph. In contrast, the acorns of Sessile Oak have very short stalks.

More species of insect feed on oak than on any other tree. The larvae of one species in particular - the Green Oak Tortrix Tortrix viridana - can completely defoliate a tree in the early summer. In response to this oaks have a second flush of leaves known as "lammas growth". As oak leaves mature they harden and turn leathery. They also concentrate tannins which helps to make them unpalatable to insect attack.

Oak is widely used as a building material because of its hard wood. By the reign of Elizabeth I, so many trees had been felled that a law was introduced to protect it. Heavy demands for timber by the Navy led to extensive planting, many of the plantations being in existence today. The acorns were widely used for animal feed - especially for pigs. Access to oak woods for this purpose was known as "right of pannage"; a system jealously guarded today by "commoners" in the New Forest. The bark used to be a source of tannin; used for curing skins in the leather industry.

Location : It is widely distributed on campus.

See Separating Sessile and Pedunculate Oaks by Steve Potter for more information on separating Pedunculate and Sessile Oaks and their hybrid.

In recent years the acorns of many of the trees have become affected by Knopper Galls. A gall is an abnormal growth caused when an insect - in this case a small wasp Andricus quercuscalis - inserts its ovipositor into the tissue of the plant in order to lay its eggs. Many of these parasitic wasps have a remarkable life cycle - this one being no exception. The female first lays her eggs on the roots of the Turkey Oak. These develop into small wasps which then lay their eggs on the flowers of the Pedunculate Oak. The resulting acorns are then disfigured causing the Knopper Gall. Thus in order for the Knopper Gall to form one needs a Turkey Oak in close proximity.