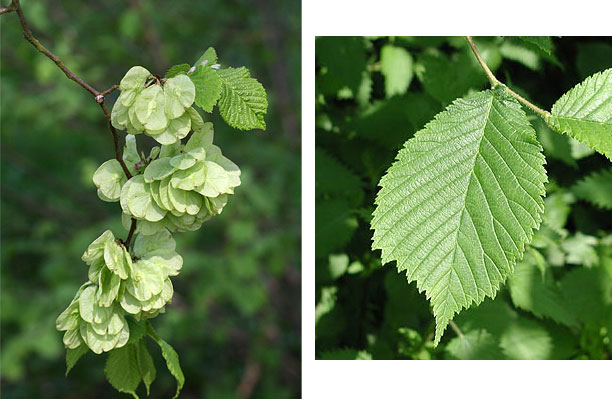 Origin: a native species that is scattered in the south and abundant in the west and north of the UK. It is planted frequently in parks and churchyards.

The bark is smooth during the early years (hence the name 'glabra') before becoming finely cracked and then gradually ridged.

In hedgerows the branches are quite prominent, especially in the winter, because they are arranged in a distinctive 'herring bone' pattern.

The leaf (opposite) could be confused with Hazel, but it has a toothed edge, long drawn out tip and it is asymmetric at the base ie. one side of the base of the leaf has a large lobe, the other side does not. The leaf is also roughly hairy.

The fruits are distinctive being large bright pale green with a prominent nutlet in the centre. They are usually profuse and make the tree stand out in the spring before the leaves emerge.

Sadly, since the demise of our English Elms due to the fungus introduced into the galleries of the Elm Bark beetle, this is the only elm one is likely to come across in much of the country. Wych Elm too suffers from Elm disease but it has not been as bad as with the other species.

Wych Elm has an association with two scarce insects that can be found at Keele - the White-letter Hairstreak butterfly and the Clouded Magpie moth, the caterpillars of which feed on the leaves.

Location : Wych Elms are scattered throughout the woodland below Keele Hall.