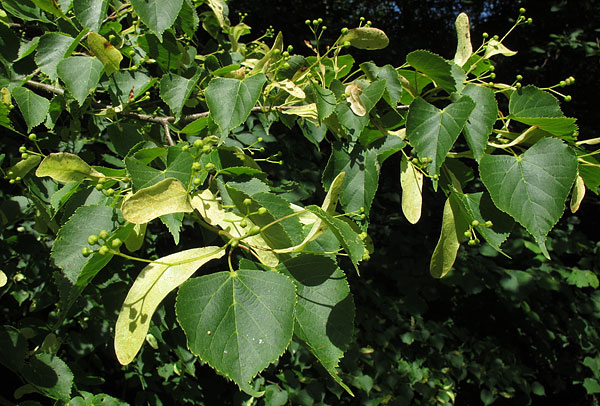 Origin: a native of England and Wales, especially in limestone areas. It is frequently-planted in parks and large gardens, churchyards etc but is rare in the wild in Staffordshire. According to Dr. Oliver Rackham, it was the dominant tree of much of England before the Pedunculate Oak. Its demise was more to the eating of its nutritious seedlings by cattle rather than through exploitation.

Tree: it forms tall and irregular domes. Older trees have downward-arching branches with burrs and shoots on the trunk - as in Common Lime. On young trees the bark is very smooth and grey but on old trees it is darker and cracked into shallow plates 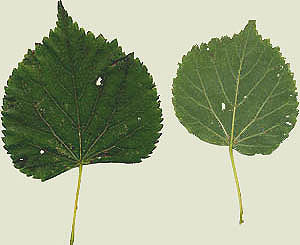 Leaves: as the name suggests the leaves are rather smaller than other species - between 4 and 7 cm long X 3 - 5 cm broad. They are dark, shiny green above and paler below with large tufts of orange hairs in the leaf axils.

The fruit is distinctive in being the only lime in which the fruits stand above the stem (photo); in all other limes they hang down. Fruits are rather small and glabrous (hairless).

Uses: it coppices well and has been worked in areas like the Wyre Forest.

Location : One outside Hornbeam Building; square L7; compartment 41; tag 3614. A mature tree can be found in the wood between the Library and the terrace but it is difficult to find.