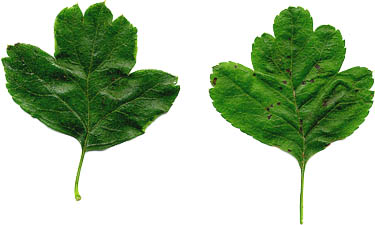 Origin: There are two species of Hawthorn native to the UK - the Common Hawthorn C. monogyna and this, the Midland Hawthorn. While the Common is indeed common in our area, Midland is more common the south of the country.

Leaves: At a distance the two look very similar but the main differences are : leaves more rounded and not as deeply dissected and the berries contain two or more seeds (one in Common).

Location : we have a number represented by the double pink variety 'Paul's Scarlet'. One is by the letter-box opposite the holly hedge; square I7 and another by Lindsay Hall compartment 63i; square J10.