This is the common plant of the hedgerow but it can grow into a sizeable tree. Because of its fast growth and spiny branches it is the tree of choice for farmland hedgerows. 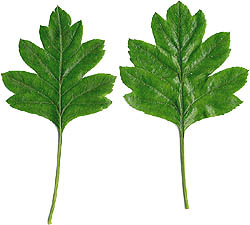 The leaves are deeply dissected and turn orange to dark red in the autumn.

The flowers are white, typical of the Rosaceae, and occur in profusion in most years, though a late frost can damage them. They turn pink shortly before they fall.

Fruit: the scientific name refers to the single seed whereas the related Midland Hawthorn C. oxyacantha (which is rare in Staffordshire) has 2-3 seeds.

In some areas destruction of Hawthorn is said to invite peril while it is considered bad luck to bring the blossoms indoors.

Location : common throughout the campus and surrounding farmland.