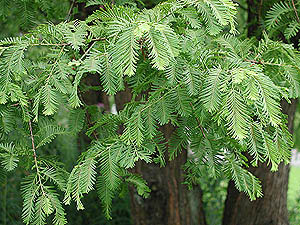 Origin: Prior to its discovery in the Hupeh Province of China in 1941, it was only known as a fossil. It was introduced to the UK in 1948 and is now frequently planted in parks and large gardens. 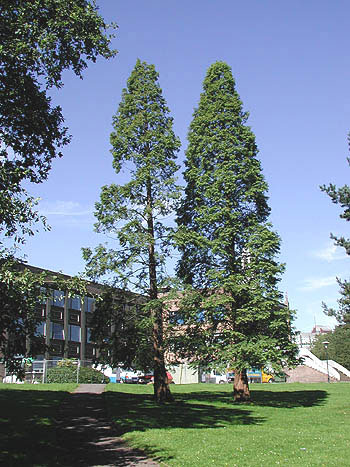 Tree: it is narrowly conic in shape, as can be seen from the picture above, with rather sparse branches. The bark is pale orange-brown with darker brown flakes coming away. On older trees the bark is stringy with shallow ridges.

This is a deciduous tree. The foliage is a bright lime-green and is usually fully out by May. The leaves are flattened and in two ranks with leaflets in pairs and opposite - the Swamp Cypress is very similar but in that species the leaflets are alternate. 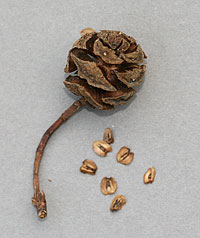 The cones are rarely seen in the UK and at Keele they appeared for the first time in 2008.

Location : There are 16 trees planted within the ring road; usually in groups of 3 or 5. The largest are outside the Earth Sciences and Geography and outside the Library.