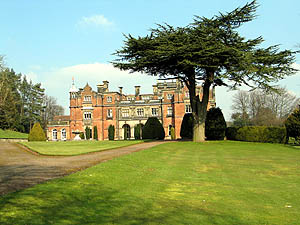 Origin: this tree is a native of Syria and SE Turkey and was first introduced to the UK in around 1630, though many of the largest trees date from the 1760s.

Mature trees are distinctive with their branches forming large horizontal plates. It is this feature that makes the tree susceptible to heavy snow falls, the accumulation of which can cause the branches to break. This has happened to our tree opposite.

Young trees have a more conic growth, similar to that of the Deodar.

Separation from Deodar is not easy on foliage but the old maxim Deodar branches descend and Lebanon's are level works well if you look at the branch tips.