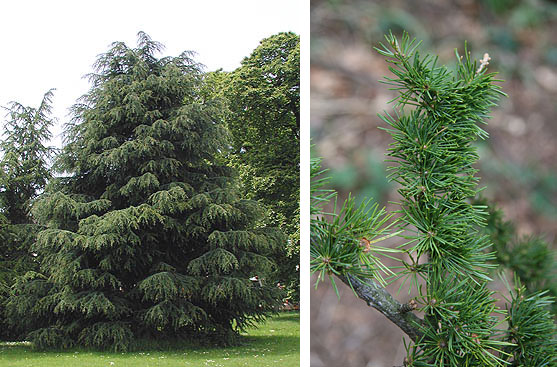 Origin: unlike the other two common cedars - Lebanon and Atlas - this is a native of the Himalayas. It was introduced in 1831 and is commonly planted in parks and gardens.

The foliage of the three cedars is very similar and identification is done more on the shape of the tree. All three have needles in radiating clusters, those of Deodar are the longest.

In Deodar the tips of the branches, especially on young shoots droop - shown clearly in the photograph. A useful guide to the three cedars is:

The cones are spherical in shape and sit on top of the branches.

At Keele : There are a number of Deodars on campus and they include; near the fountain by Keele Hall - compartment 23, square M11, tag 7508; between Tawney Building and Walter Moberly Hall - compartment 44c, square L7, tags 3642 and 3643; and lining the road leading to Larchwood - square I8.