A native of the cool, temperate regions Western Europe and Asia, particularly in higher latitudes, it gets its scientific name from the leaves that shimmer in the breeze. 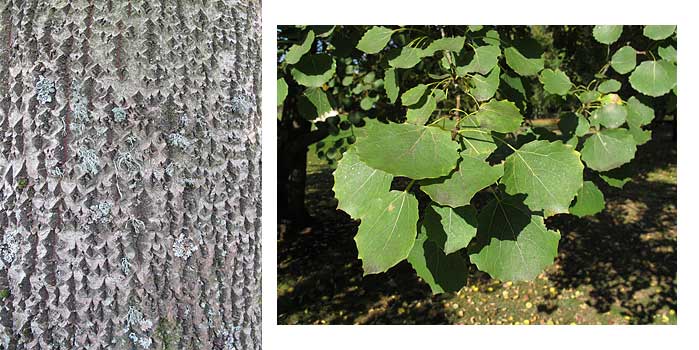 Tree : It is a medium-sized deciduous tree growing to 10–25 m tall, with a trunk up to 1 m diameter. It suckers freely.

Leaves : The mature leaves are roundish 2-8 cm diameter with big wavy teeth; the petiole or stalk is flattened causing the leaf to shake in the wind, so much so that you often hear the tree before you see it!.

The bark, as it gets older, develops diamond-shaped indentations similar to those of Grey Poplar.

The flowers are wind-pollinated catkins produced in early spring before the new leaves appear. The tree is dioecious with male and female flowers on separate trees.

Location : Small grove by the old University entrance Square N2; Compartments 56a and 56b.