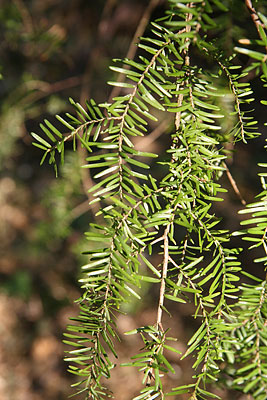 Origin: Hemlocks are closely related to spruces and their timber is mainly used in paper making. The name "Hemlock" derives from the scent of the crushed foliage which is said to resemble that of the poisonous herb Hemlock Conium maculatum.

This species is highly abundant in its native pacific north-west North America. A highly shade-tolerant species, this tree is often found under the canopy of much larger trees, soaking in whatever sunlight it is allowed. When the larger trees fall the Western Hemlock is quick to fill their place, and continues to form a dense understory of saplings. In a forest of its native habitat that has remained undisturbed by fire or other damaging natural impacts, it is likely to be dominated by Western Hemlock, from the saplings to the old-growth. When producing cones it is known to drop one of its 1-3 cm long cones for every one square inch underneath its canopy.

The foliage of the Western and Eastern Hemlocks is very similar, being rather Yew-like in appearance and having two white lines beneath. The critical difference that Eastern has a line of reversed leaves along the top of the branch so that the white undersides of the leaves are uppermost.

Other good features, though, are that the Eastern has young shoots with long hairs (Western has mixed long and short hairs), pointed buds (Western are rounded at apex), and leaves tapering towards the apex (Western are parallel sided). In outline, the leading shoot of Western Hemlock droops whereas it does not in Eastern.

Location : Western Hemlocks are scattered around the lower part of campus. There are a number growing under Scots Pines on the knoll by Keele Hall courtyard; compartment 26; square N9. Others can be found on the far side of Lake 1; compartment 18b; square O10.