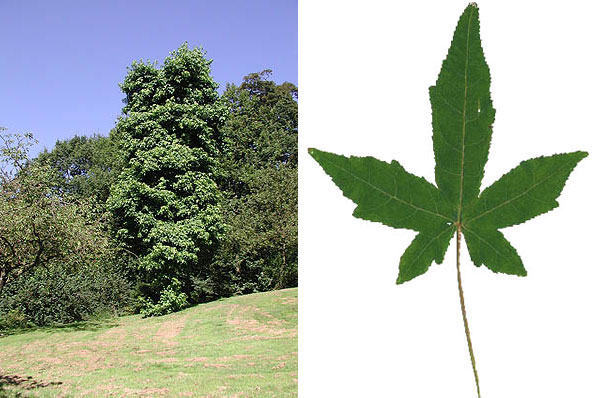 Origin: a native of Eastern and Southern USA, it was introduced here in 1681. It is frequently planted in parks and gardens for its autumn colours - though these can be fickle at times!

Tree: young trees are conic or ovoid; older trees more domed. The bark is pale grey on young trees, later becoming fissured into squares and then becoming rough with a network of ridges.

The leaves are rather maple-like but are arranged alternately along the stem (on maples they are opposite).They have a resinous smell when crushed and in autumn turn a deep red. However, not all trees behave this way. The Keele specimen above has very poor autumn colours. If buying a tree it is important to do so in autumn when you can see the leaf colour.

Uses: its wood is imported as satin-walnut for furniture making.

Location : Just the one tree. It can be found between the Clock House and Keele Hall; compartment 27; square M10.