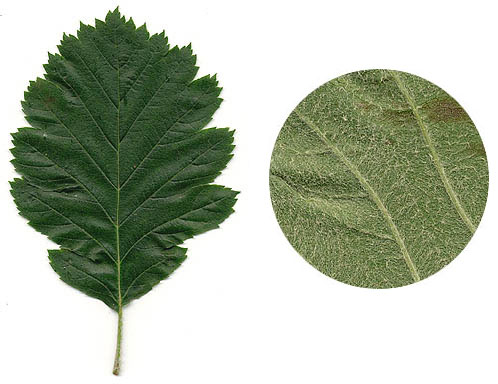 A long-established introduction from Sweden and the Baltic countries, much planted in parks, gardens and streets.

Whitebeams are a complex group of trees to identify. This species has the rounded leaf with the white felty underside of the Common Whitebeam S. aria and the divided leaf margin of the Rowan S. aucuparia.

The flowers are typical of the Rosaceae family being white and in an umbel-like group resembling a mass of Hawthorn flowers. The fruits are red with up to 20 in a bunch.

Location : there are a number of Whitebeams on campus but the only tree showing features of Swedish Whitebeam that we have found is by the track to the Observatory - compartment 61b, square O7.