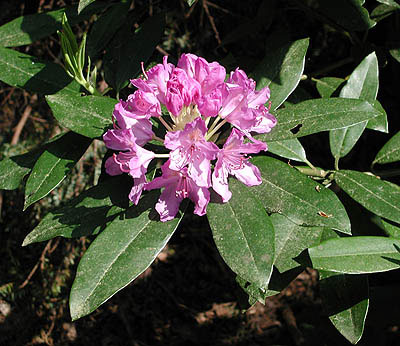 This species is native to three main regions: around about the Black Sea, the Balkans and in the Iberian Peninsula. It was introduced into the British Isles in the second half of the eighteenth century.

It is a very common plant in parks and was much planted in Victorian times. It has given rise to a number of hybrids and in fact most plants in cultivation and those that have escaped may be hybrids and not the pure species.

It is a great nuisance in that it spreads easily into woodland and into open acid peaty ground such as bogland.

It poses a threat both to natural vegetation and to the balance of species in planted woodland and parkland, often forming great impenetrable thickets if left unchecked. In recent years it has been found to be a host for Phytopthora ramorum. In the USA it is known as Sudden Oak Death but in the UK it has been found to attack Larch. So serious is the threat from this organism that Rhododendron ponticum has to be cleared from areas where the disease is found. At Keele this has involved clearance from our woodland, along with over 1500 infected Larch trees. Unfortunately it is difficult to remove and it is starting to re-sprout.

Location : throughout the woodland.