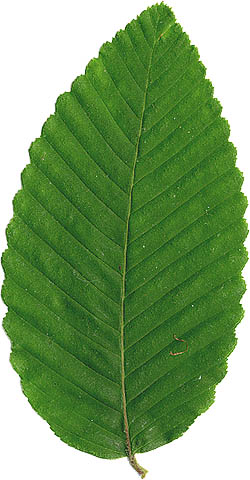 Origin: The trees of the genus Nothofagus are known a Southern Beeches of which there are about 40 species found in South America and Australasia. They are mostly evergreen but seven are deciduous with six of those coming from South America.

This species, a native of Chile, was introduced in 1913 and is a popular tree because of its rapid growth - often 2m per year.

The branches form a distinctive herring-bone pattern with the leaflets arranged alternately along the branch. The leaves are similar to that of Roble Beech but that species has only 7 - 11 pairs of veins whereas this species has 15 - 22.

The bark is smooth like that of the Common Beech Fagus sylvatica ('Rauli' is Spanish for beech) with vertical fissure developing later.

Uses: it is an important timber crop, being used for furniture, doors, stairs etc. It is easy to work and gives a smooth finish when worked in any direction. It is denser than Common Beech.

Location : one tree in Barnes Dell by the side of the path on the west side of the Dell; compartment 12B; square Q14.