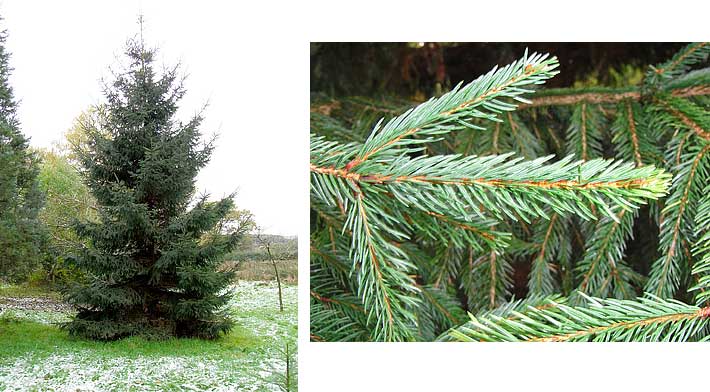 Origin: A native of Europe, Scandinavia to the Balkans and Russia, it is widely planted as a forestry tree and is better known as the familiar Christmas Tree.

Tree: it is a shapely tree, conical and with the branches gracefully arching down.

The trunk is straight and smooth compared to that of Sitka Spruce which, for the same age, is cracked into lifting plates.

The foliage is often confused with that of Sitka Spruce but in that species the needles are sharp and with two pale lines beneath whereas in Norway Spruce the needles are green all over and not so sharp that you can't squeeze the foliage.

The cone is long and cylindrical, 12-15cm, compared to that of Sitka which is only 5-8 cm.

Uses: also known as "White Deal" it has a flexible timber which is used for internal building work, boxes and paper pulp. It is also used by violin makers. In the past it was a source of turpentine and pitch.

Location : found in several plantations; Stacy Plantation which runs from the Observatory and backs on to Horwood estate; and at the southern end of campus overlooking the motorway; compartments 6c and 6g, squares P19, Q19.