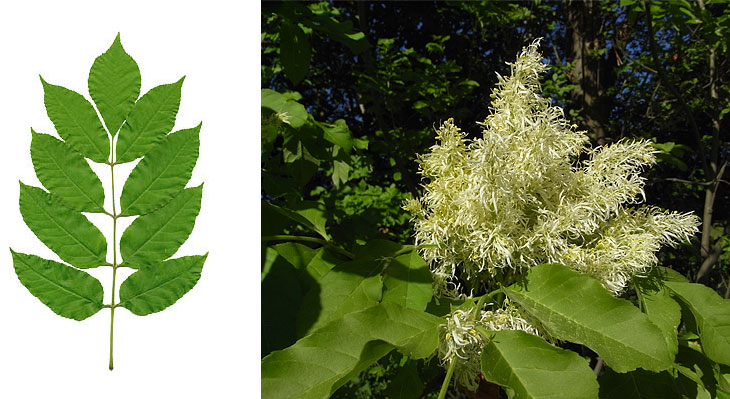 Origin: this is not the Manna referred to in the Bible - that refers to the edible flakes of a dried and ground up desert lichen. This tree is a native of central Europe where it grows in mixed woods, thickets and rocky places. It was introduced to Britain in 1700 and is usually grafted on to a rootstock of Common Ash.

The leaves are opposite with 5 to 9 stalked leaflets; the veins on the underside are usually hairy at the base. The leaf buds are grey or brown, unlike those of the Common Ash which are black.

Flowers: It is distinctive among ashes for its abundant creamy-white flowers which come out with the leaves in the spring.

Uses: The sap is collected as a pale yellow gum that dries on contact with air. This is then made into a syrup which is used as a mild laxative.

Location : one tree with a collection of ash species towards the bottom of the grounds; compartment 7a; square S17, and one in the Special Collection below the Walled Garden; compartment 24; square K10. However, there is a good show alongside the A34 between the Darlaston Inn roundabout and the Walton roundabout at Stone.