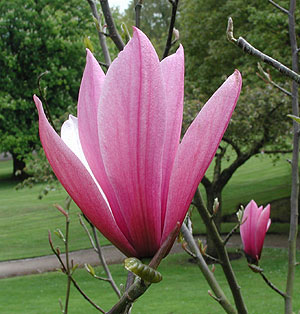 The wild distribution of this tree has been obscured by centuries of cultivation in Japan and China. Introduced in 1861, it is a shade-tolerant plant growing to 4 metres. It flowers from late April through to June.

Location :This tree was planted on 7th May 2004 in memory of John Hodgkinson (see planting ceremony), the first Registrar of the University. It can be found between the Hall and the Clock House; compartment 25, square M10.