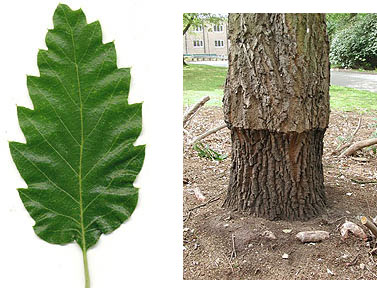 Origin: Lucombe Oak is a hybrid between the Cork Oak Q. suber and Turkey Oak Q. cerris. It was raised by Lucombe in his Exeter nursery in 1762 and is common in gardens of the West Country but less common elsewhere. It is said that Lucombe was so impressed with the timber, that he kept planks of it under his bed to make his coffin!

Bark: the bark is pale grey, cut into corky ridges.

Leaves: the foliage is nearly evergreen, 10-12 cm long, each lobe having a small spine at the tip (mucronate).

Fruit: the acorns are minute in their first year, then 2-2.5cm long in the second year on a 1cnm stalk or peduncle. The cups have dense, protruding scales.

Location : we have just the one tree; behind the Huxley Building, by the ring-road, compartment 33b, square K8, tag 6508. It is a grafted specimen, the line of the graft being clearly visible. Interestingly the stock is English Oak, which is slower growing than the Lucombe Oak, and accounts for the difference in diameter of the trunk. The difference in bark texture between the two is clearly visible.