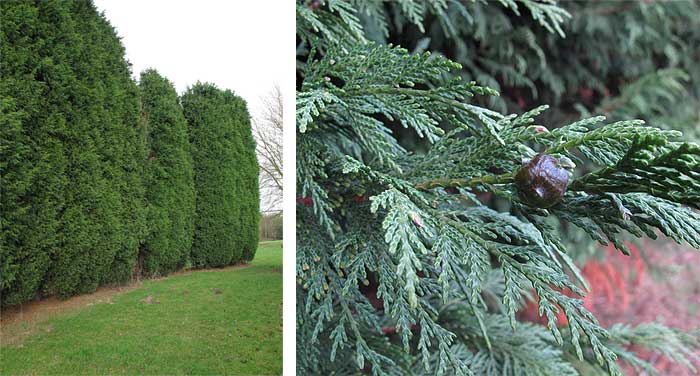 Leyland Cypress is one of those trees that your either love or hate but you can't deny that left to its own devices it forms a magnificent tree!

It is a fast-growing evergreen tree that is much used in horticulture for hedging and screening. Even on poor soils they have been known to reach 15m in as many years and for this reason they are grown to provide privacy resulting in many, often acrimonious, disputes.

The tree is a hybrid arising between Nootka Cypress Xanthocyparis nootkatensis are  Monterey Cypress Cupressus macrocarpa something that would not have occurred between trees in their natural habitat in west coast USA where they exist over 400 miles apart. There are varied accounts as to its origins but it seems to have occurred around 1888 at Leighton Hall in Powys and later at Haggerston Castle in Northumberland; both homes at one time to the Leyland family

It is densely columnar with branches from top to bottom. Grows to 30m but is then prone to wind damage. The bark is dull red-brown with stringy ridges. The leaves, unlike those of Western Red Cedar, do not smell and have no white marks beneath. The flowers are often absent but it depends on the variety - of which there are many.

Location : The trees illustrated above are between the tennis courts and the Nantwich Road; Square I3; compartment 56K.