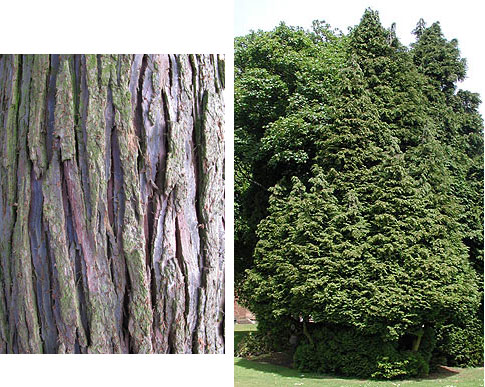 Origin: a native of the mountains of NW California and SW Oregon between 4000 and 6000ft. It was introduced to Britain in 1854 and seeds were grown by Lawson seed merchants of Edinburgh. It is now abundant in towns and suburban gardens and parks in a vast array of cultivars. According to Alan Mitchell, no Lawson in Britain has yet stopped growing!

Tree: the shape is cone-like with a drooping leading shoot. The trunk can be multi-branched.

Bark: the bark is shiny, purplish-brown in colour and with age becomes vertically fissured into long plates. 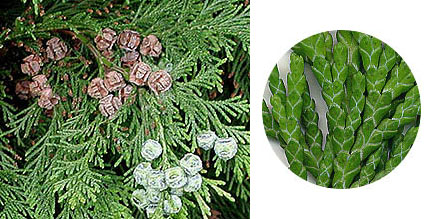 Leaf: the leaf is scale-like and, typically, rather dark-green above with a pale translucent gland in the centre of the median leaves (hold leaf up to the light - you may need a handlens).

The underside of the leaf has narrow white edging to the joints between the scales.

However, with over 200 cultivars, leaf colour can vary from green, through yellow to blue! The crushed leaves give off a resinous, some say, parsley-like aroma.

Flowers and fruit: most trees bear abundant flowers. The male are very small, crimson-tipped and are found at the tips of the finest branches. After shedding pollen in spring, they wither and fall off. The female flowers are slate blue at first ca. 5mm diameter, turning green before opening as woody cones.

Uses: It is a valuable tree for shelter belts and screening and is a popular nesting and roosting site for birds such as Goldfinch, Greenfinch and Chaffinch.

Western Red Cedar is similar but that species has a straight leading shoot, glossy foliage above, broad whiteish bands beneath, more oval-shaped cones and a sweet fruity smell when crushed.

Location : There are many examples; a small clump can be found near the weather station by Keele Hall; compartment 21b; square N11