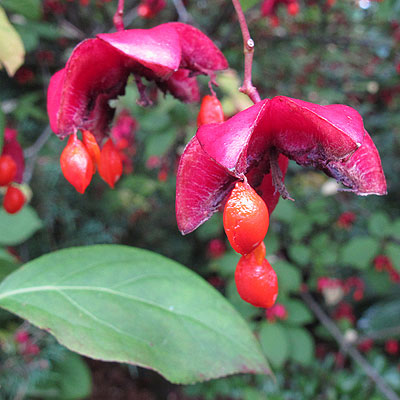 A native of  southern France and Spain, to Turkey, the Caucasus, the Crimea, northern Iraq and northwest Iran and in the south in Morocco and Algeria.

It is a deciduous shrub up to 6 m with arching branches, and oblong leaves 8–16 cm long. The green flowers are usually five-petalled and borne in groups on slender stems from May to June. These are followed in September to October by bright red fruits with four or five winged lobes, measuring 20 mm across and containing orange seeds

It is a well-known species in gardens, planted since the 1730s and being particularly valued for the red colour of its fruit and leaves in autumn. It was given an Award of Merit from the Royal Horticultural Society in 1916.

Location : By the side of the path between the shops and Keele Hall