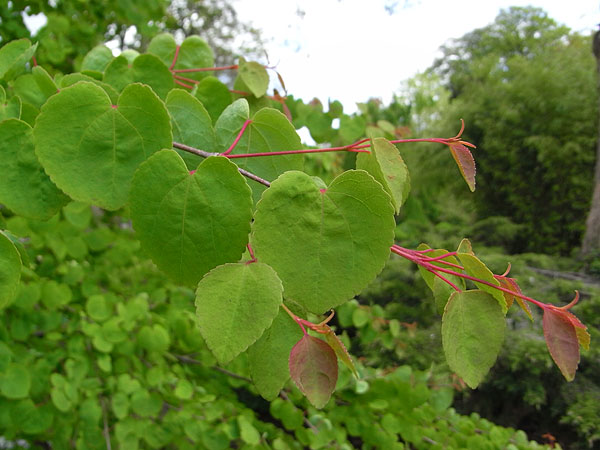 Origin : This native of Japan and China was introduced in 1865 and is now often planted in gardens and parks. It is a very primitive hardwood species, closely related to the Magnolias and is unusual in having some primitive features of a conifer or softwood and separate male and female trees. The family is a very primitive one and may even pre-date the Maidenhair Tree- so a living fossil! The scientific name refers to the similarity of the leaves to those of the genus Cercis which includes the Judas Tree.

Tree : It is an extremely attractive tree that can, in the wild, grow to 200ft with a trunk to 16ft diameter and circumference (girth) of 80ft making it one of the largest hardwood trees in Asia. It can live to 1000 years and is rarely bothered by pests or disease.  It often grows as a multiple trunk and in cultivation there are several pendulous varieties. The bark of mature trees is rough and furrowed and it is dioecious (male and female flowers are on separate trees).

Leaves : The rounded, heart-shaped leaves which are borne opposite each other are a golden colour when they first emerge, turning pale green with age. In autumn they turn scarlet to crimson and, as they rot, they exude a sweet smell of toffee because of their high sugar content. The autumn colour can be variable, and the leaves may not colour up at all in dry years.

Flowers : Tiny reddish flowers appear in spring (but not seen at Keele yet) but are not showy.

Fruit : The fruit is a cluster of 2-4 small pods, each pod 1-2 cm long with numerous small, flattened and winged seeds.

Cultivation : They need moist, deep soil and shelter from the winds and early frosts which can damage the foliage. They are also susceptible to drought.