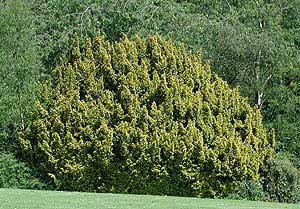 The Irish Yew arose as a "sport" in Co. Fermanagh in 1780 from a normal female Common Yew. It has a distinctive upright habit.

Typically the leaves are very dark green but the form 'Fastigiata Aurea' is, as the name suggest, golden yellow and is illustrated opposite. It is widely planted in churchyards and large gardens.