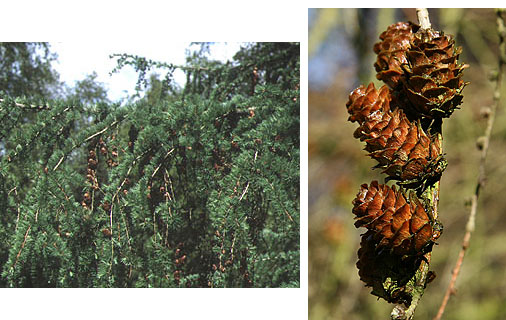 Origin: this hybrid first arose around 1897 at Dunkeld, Scotland. It is a cross between the European Larch L. decidua and the Japanese Larch L. kaempferi.

It is a common forestry tree and is said to be superior to either of its two parents. It grows faster and will do better under poorer conditions too.

Tree: in shape it is not quite so narrowly conical as European Larch, often has long, low branches which sweep outwards and slightly upwards. Like all larches it is deciduous.

Fruit: The main separation is on the shape of the cones. In Japanese the scales turn down strongly at the tip. In European the don't turn down at all, and in the hybrid they only slightly turn down - as shown opposite. The Japanese Larch cones are also not so elongate.

Uses: widely used in woodland landscaping but the timber is very durable and of use for fences, gates etc.

Location : Most of our Hybrid Larch were felled because of infection with Phytophthora. There are a few remaining by Church Plantation.