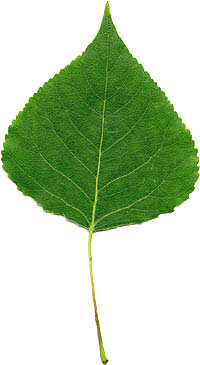 Origin: this is the name given to a range of cultivars originating from a cross between our native Black Poplar P. nigra and the American Eastern Cottonwood P. deltoides.

The commonest of these cultivars is Black Italian Poplar 'Serotina'. It is very common in cities, towns, parks and gardens and as a screen for factories etc.

It is a very quick grower, putting on up to 2m a year. The leaves emerge in late May and are reddish-brown at first, becoming green later.

The catkins emerge in April and turn reddish before shedding their pollen.

Identification of Poplars and their hybrids is a a job for the specialist!

Location : One behind the walled garden compartment 24; square K10 and a plantation near the motorway compartments 4a and 5a; squares P19, R20, S20.