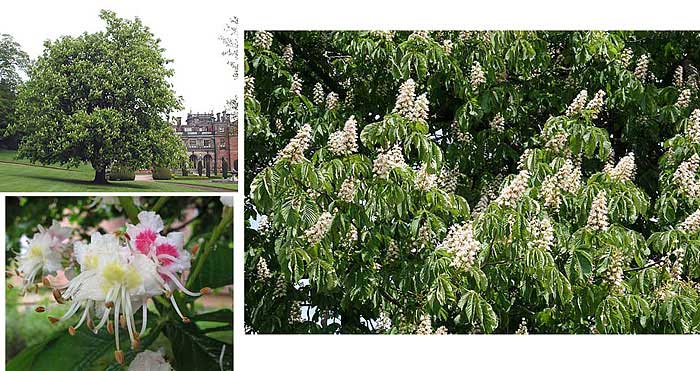 Origin: This familiar and stately tree was unknown to botanists until around 1596 when it was discovered growing on mountain slopes in the area where the borders of Greece, Albania and the former Yugoslavia meet. It was introduced to the UK in 1616. Allowed to grow freely it forms a magnificent tree and it is not surprising that it is widely planted in parks, large gardens, churchyards and village greens.

Flowers: it flowers freely; the characteristic "candles" of white flowers, which emerge soon after the leaves, grow up to 20cm tall. Not all the flowers in a spike open at once so that the flowering period is prolonged. Interestingly, once a flower has been pollinated, its colour changes from yellow to red as a warning to visiting bees not to bother with it!

Bud: the large bud sticky bud, illustrated above, is characteristic in the late winter months as is the crescent-shaped leaf scar also shown on this picture.

Fruit: the glossy fruits, well known to children as the "conker", give rise to the tree's American name of 'buckeye' on account of their resemblance to the eyes of a deer. They are formed inside a spiky, green outer shell and are eaten by deer and cattle. Legend has it that they were ground up and fed to horses by Turks as a cure for broken wind.

Typical leaf and the mine of the Horse-chestnut Leaf Miner

Leaf: the digitate (hand-like) leaves are bright fresh green at first, becoming darker later. In autumn the turn yellow and gold, occasionally red. They have 5 to 7 leaflets radiating from a stout yellow stalk or petiole.

Some trees are known to be over 300 years old but many of about 100 years old begin to shed branches as the wood is quite weak. In fact, heavy rains in summer can cause branches to break off so it's not a good idea to shelter under one! 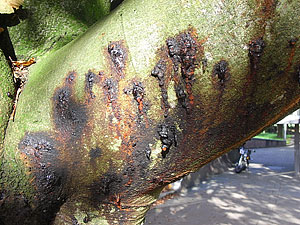 Recently Horse Chestnut trees have been attacked by a bacterium (Pseudomonas syringae pathovar aesculi.) that causes weeping lesions: scattered drops of rusty-red, yellow-brown or almost black, gummy liquid ooze from small or large patches of dying bark on the stems or branches.

This is known as Bleeding Canker. Over several years, the areas of wood underneath the bleeding areas may coalesce and extend until they encircle the entire trunk or branch.

Another attacker of the tree - the Horse-chestnut Leaf Miner Cameraria ohridella was found for the first time on campus in October 2009. The larvae burrow between the upper and lower surfaces of the leaf and can, in extreme conditions, affect the tree, causing premature leaf fall. It was first found in the south of England in 2002 and has steadily been spreading northwards. It has spread across the county in the space of three years!

Uses: The wood, because of its softness, has been used for making children's toys as well as for artificial limbs.

Location : Apart from the tree illustrated above (planted by Edward VII in 1901), a large tree grows by the roadside at Barnes Hall near the old entrance to the University while others have been planted by William Smith Building and along Clock House Drive.