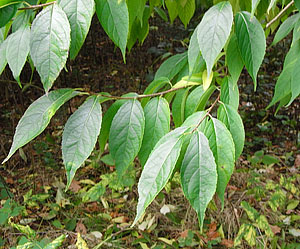 Also known as the Chinese Rubber Tree, it is unrelated to true Gutta-percha tree of SE Asia or the South American rubber tree. It is a native of China that is grown for the medicinal properties of the bark and is not now known in the wild. It was introduced to the UK in 1896 and is uncommon in cultivation here being of interest as it is the only cold-tolerant rubber-producing plant.

Growing up to 20m, the bark is greyish with deep, knobbly, criss-crossed fissures. The dark-green leaves, up to 4cm long, are deciduous, alternate, ovate with a drawn out tip (acuminate) and a toothed (serrate) margin. If you break a leaf carefully and pull the two halves apart then strands of latex exuding from the cut veins soldify into rubber. This is a feature shared with the Dogwoods. The flowers are inconspicuous, small and greenish. The fruit is similar to that of an elm.

Uses : an important tree in Chinese medicine where the bark is harvested when the tree is 15-20 years old. Extracts are said to show anti-hypertensive, anti-complementary, anti-oxidative, and anti-gastric ulcer effects.

Location : one in the Special Collection below the Walled Garden; compartment 24; square K10.