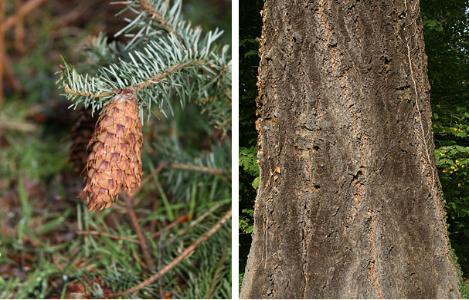 Origin: a native to the pacific northwest of North America, this species was first described by Europeans in 1792 when the English Captain Vancouver’s ship Discovery anchored near where Seattle, Washington is today.

Archibald Menzies, the ship's surgeon and botanist, made detailed notations of its characteristics, hence the species name menziesii. The first specimens of seed were sent back to England by the Scottish botanist explorer David Douglas in the early 1800s, hence the common name Douglas Fir.

The Douglas Fir regularly grows to over 90 metres tall in undisturbed conditions, and some specimens have been found to be over 1000 years in age. As a pioneer species of tree, young seedlings are some of the first to reforest burns or other clearings in its native habitat.

Foliage: 2-4 cm long soft needles that typically grow all the way around the twig, like a bottle-brush.

Cones: unusual 4-10 cm long cones hang down from the branches (rather than growing upwards on the uppermost branches as in a true fir or Abies )and are distinctive in that the scales have small whiskers.

Uses: the ancient uses of this tree included fuel wood and tool making. Today it is one of the most common lumber species in the world, due to its rapid growth and relatively strong characteristics.

Location : There is a large specimen on the knoll behind Keele Hall courtyard; compartment 26, square N9 and others near the motorway; compartment 6C; square Q19.