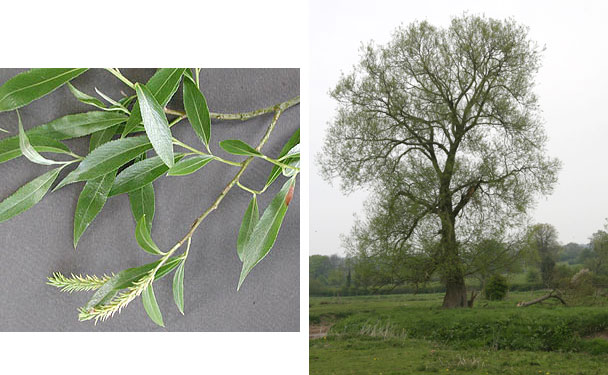 Origin: A native species, often abundant beside rivers and canals where it is often pollarded.

The status of Crack Willow is confused. Its name is given to a complex of tree-willows consisting of a number of distinct segregates all of which share the features below. In Staffordshire we have three varieties : Salix fragilis fragilis, Salix f. russeliana and Salix f. decipiens.

The bark is covered by a network of thick ridges. The tree has long slender, upswept branches with rather pendulous leaves. The shoots are pale orange before the leaves appear in March/April.

The twigs are brittle at the point of attachment and break off cleanly at the base - hence the name Crack Willow.

Location : one small tree by the pool behind the Sports Centre, compartment 56F, square J4, tag 2191; another by Estates and Buildings compartment 50B, square K5, tag 2282.