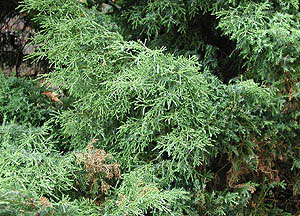 The Juniper is one of only three conifers native to the British Isles, the other two being Yew and Scots Pine. The only representative of this genus at Keele is the Chinese Juniper. It is a native of China and Japan and was introduced in around 1804. It is commonly planted in gardens, parks etc because of its fast growth.

Like all Junipers, it has two types of leaf; small scale-like leaves and longer needle-like leaves arranged in whorls of 3 or in opposite pairs; glaucous-blue in colour. The two types are more often found separately on the tree. The crushed foliage is said to smell of cats but I think it smells more of celery.

Location : alongside the path from the shops to Keele Hall square N8; compartment 29a; trees are small and un-tagged.